Tally Marks on the Prison Wall 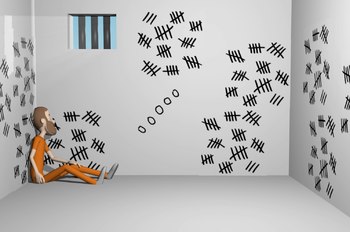 It's been so long...
Someone imprisoned somewhere, like a jail cell, keeps track of the time spent imprisoned by drawing or scratching lines on the wall of their room. Sometimes used humorously when the time spent imprisoned is actually short, and the lines the prisoner drew represent minutes instead of days, or something similar. Sometimes stories will depict just the room after the prisoner is gone, and the person looking at the room just sees all of the lines and can tell someone was stuck in there a long time.
Advertisement:

Compare Room Full of Crazy for when other things are scribbled on the walls.