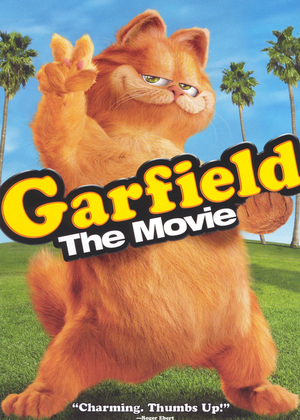 The big screen may not be big enough...
A Live-Action Adaptation of the popular comic strip Garfield. It was released in 2004 by 20th Century Fox. It starred Bill Murray as the voice of Garfield, Breckin Meyer as Jon, and Jennifer Love Hewitt as Liz. It was directed by Pete Hewitt. note  no relation to Jennifer
Advertisement:

The plot deals with Garfield, as lazy and fat as ever, being the extreme Jerkass and Deadpan Snarker he is. Jon Arbuckle buys a dog named Odie because his extreme crush, Liz Wilson told him to. Needless to say, Garfield doesn't like this, but then Odie gets kidnapped by TV show host "Happy Chapman" (Stephen Tobolowsky). Garfield sets out on an adventure to rescue Odie... and get back to his beloved chair! The plot borrows crucial elements from the 1982 animated half-hour Here Comes Garfield, such as the animal kennel and Garfield having to go rescue Odie.

The movie was followed with a sequel in 2006, called Garfield: A Tail Of Two Kitties. In it, Liz goes to England to make a speech, and while she, Jon, and Garfield are there, Garfield gets his life mixed up with that of an English cat named Prince (voiced by Tim Curry). But the dastardly Lord Dargis (Billy Connolly) wants the cat out of the picture so he can inherit Carlyle Castle.

After 20th Century Fox's film rights to the character expired, reports circulated in 2016 that Garfield would have its film franchise rebooted at Alcon Entertainment. The new franchise would consist entirely of CGI-animation, rather than the live-action/CGI hybrid style of the 20th Century Fox film series, and Jim Davis, who had no involvement in Fox's franchise, will been attached as executive producer. Despite Davis ultimately selling the Garfield IP to Nickelodeon, this film will still be produced by Alcon and distributed by Sony Pictures. Chris Pratt is set to voice Garfield.

Following its acquisition of 21st Century Fox, Disney uploaded the duology on their streaming service Disney+ as now Disney maintains the distribution rights to both live-action Garfield films.