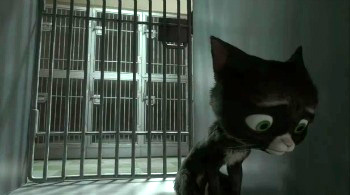 "They took us to the pound! I told you! This is it, this is the end of the line! WE GOTTA GET OUT OF HERE!"
— Chance, Homeward Bound: The Incredible Journey
Advertisement:

One trope that's sure to rub animal-shelter volunteers the wrong way is the frequently antagonistic portrayal of animal shelters in fiction.

This is especially the case with Talking Animal cartoons, where pounds are depicted as little more than prisons full of animal inmates "serving time" for some alleged misdemeanor offense and hoping to one day see the warm sun and blue skies again. In extreme cases, depictions may even echo Nazi concentration camps with Diabolical Dogcatchers deliberately hunting down and impounding innocent household pets by the hundreds (as one New York City pound became infamous for during the 1800s) to be "put to sleep", never to see their beloved family again unless they immediately stage some kind of daring jailbreak.

Now while it is true that animal-control officers may impound problematic or aggressive animals when responding to an emergency call, and that not enough lost pets at animal shelters get reunited with their families, modern (Real Life) animal-control facilities and shelters are nowhere near the depraved standards that fiction likes to depict them with. Animal shelters know firsthand how deeply pets become family members, and have a vested interest in providing their animals with a regular supply of food, shelter, health care, and companionship — doubly so for "rescue" shelters who specialize in rehabilitating victims of neglect or abuse by previous human owners. Meanwhile, they do their best to get them adopted by loving new guardians or try to find the proper owners of lost animals, while leaving euthanasia as an absolute last resort (or, in the case of "no-kill" shelters, not using it at all).

Fortunately becoming a Discredited Trope with animal welfare groups (not the Animal Wrongs Group) making the plight of abandoned and abused animals more well-known, though it may have originated from the Forgotten Trope of the Diabolical Dog Catcher (especially in areas where pet ownership required an official license and not everyone could afford such).

A particularly strange variation can occur with zoos and/or wildlife rehabilitation centers, who work with non-domestic animals that (for whatever reason) might not survive in the wild; they too have a vested interest in their animals' health and upkeep. Works that give the message that all zoos are unethical ignore that, among other things, in Real Life zoos have saved many species from extinction.

Sister-trope to Menagerie of Misery. Probably related to the Sadistic Science Lab and the fear of winding up there, and the Orphanage of Fear.

Dr. Dolittle visits the pound to get the dog Lucky and discovers an animal prison like environment, complete with guards that look like police officers, cages with thick metal bars and despondent dogs including one who declares "Dead dog walking" upon seeing Lucky.

Dr. Dolittle visits the pound to get the dog Lucky and discovers an animal prison like environment, complete with guards that look like police officers, cages with thick metal bars and despondent dogs including one who declares "Dead dog walking" upon seeing Lucky.