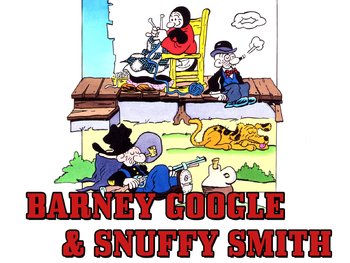 Snuffy Smith is a long-running newspaper comic about a hillbilly community. It originally began in 1919 as Barney Google, about a diminutive sportsman involved primarily in horse races. The strip reached mainstream popularity in The Roaring '20s with the introduction of Barney's horse Spark Plug; The strip sparked a trend for continuity-laden comics such as Toots and Casper and Tillie the Toiler, while "Sparky" became a popular nickname for boys (including future cartoonist Charles Schulz), and a song about the title character and his "goo-goo-googly eyes" became a smash hit in 1923.

Once the Smith clan was introduced in the mid-1930s, however, Barney moved Out of Focus and was eventually written out of the strip entirely in favor of the more-popular Smith around 1954. The official name of the strip remains Barney Google and Snuffy Smith, even though the former character hasn't been a regular for 60 years.

The Smith clan is:

Has the distinction of being the oldest currently-running daily comic in newspaper print in the U.S., as The Katzenjammer Kids (running from 1897) runs only on Sundays, while Gasoline Alley (begun in 1918) ran originally as a Sunday-only panel.