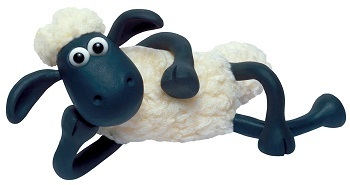 Baa-sking.
An Aardman Animations children's program premiering in 2007, Shaun the Sheep is centered on the titular Ensemble Dark Horse from their popular Wallace & Gromit short A Close Shave. This time around, Shaun lives on a farm Oop North with his flock, overseen by a dimwitted farmer and his much smarter dog, Bitzer. The series later got a Spinoff of its own called Timmy Time.
Advertisement:

A movie was released in 2015. In this, a series of accidents sends the Farmer, Bitzer and the sheep to a big city (called, wait for it... The Big City), leading to some interactions with a larger temporary cast. (The teaser trailer, which spoofs the Big Damn Movie trope, can be found here

.) The film shares characters, setting and a considerable number of tropes with the TV series, and is also covered here.

A second film, entitled Farmageddon, was announced in 2018 and released theatrically on October 18, 2019. Although initially intended to have the same release platform in the United States, Netflix obtained the rights and the film was released on February 14, 2020.

Netflix also released a continuation series (now subtitled Adventures from Mossy Bottom) in 2020. Retaining the same format it introduces new characters including a hyperactive Squirrel and a rival farmer and his sheepdog.

Shaun the Sheep, the television series, provides examples of the following tropes, many of which also recur in the films:

The movie version of Shaun the Sheep provides examples of the following tropes:

A Shaun the Sheep Movie: Farmageddon provides examples of the following tropes: