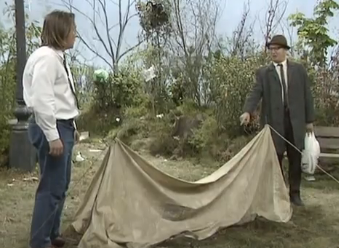 At least they've got some chocolate Hobnobs...
"Calvin, tell your dad that any judge would take this trip as grounds for divorce."
— Mom, Calvin and Hobbes
Advertisement:

Simply put, several members of the cast go on a camping trip, and disaster ensues.

This plot is sometimes used even in situations where the characters do not live anywhere near the wilderness, nor seem the type who would even go on camping trips or have any experience doing so. In fact, you can guarantee that, out of a whole group, only one person will even think the trip is a good idea: usually Dad (if it's a family Sitcom) or the guy who remembers doing it as a kid, and will always view the experience through a Nostalgia Filter. (The Bratty Teenage Daughter, on the other hand, will not be shy about acting like a City Mouse.) Another variant is the father (and it's nearly always the father) coming up with the whole thing as a way to have a cheap vacation, either because they can't afford better or because he can't be persuaded to unchain his wallet.note As anyone who's ever done this can tell you, a motel room and a pitch at a campsite are actually quite similar in price, and exceedingly cheap examples of either should be regarded with some caution. A father (especially a macho one to a nerdy son) might also take his son on one of these out of a desire for bonding.

Typical disasters include being Snowed-In, dealing with never-ending rain, struggling with a Hard-to-Light Fire, running out of food, suffering from Cabin Fever, poison ivy, or getting attacked by an incredibly fake-looking bear. (Or Bigfoot. Or every animal.) It would seem much safer to go to a resort lodge to avoid such things, but that will usually be shot down due to budget or because it's not "traditional" enough. It's much cheaper to use an old wood cabin set, or dark set obscured by bushes where the camera never moves away from a campfire. An even cheaper device is characters going ice fishing, sometimes in said cabin.

Occasionally the excuse given is the trip is part of a "company retreat", in which case it's the Pointy-Haired Boss who's the only one who thinks it's a good idea.

A subtrope of Camping Episode. See also Macho Disaster Expedition and Summer Campy. Don't Go in the Woods is the darker and deadlier horror equivalent of this. Compare Deadly Road Trip, where any trip to a foreign land ends badly. Sometimes, though, one person enjoys it (usually a Nature Lover and/or someone with very good luck), in which case it overlaps with Only One Finds It Fun.

Ice fishing (the car keys will be dropped in the hole)

Camping in the Dump

Fergy and Paulie go camping with Langston ...in the dump.

Camping in the Dump

Fergy and Paulie go camping with Langston ...in the dump.