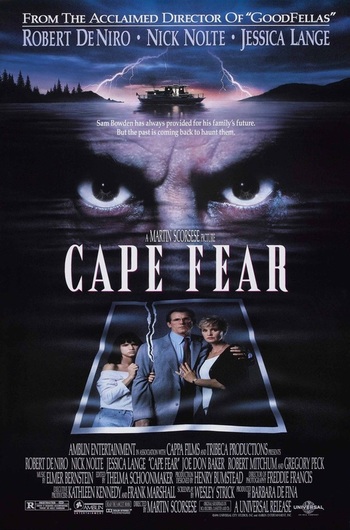 Robert De Niro Is Staring Into Your Soul.
Advertisement:

Cape Fear is a 1962 thriller film directed by J. Lee Thompson, based on the novel The Executioners by John D. MacDonald.

It tells the story of Sam Bowden (Gregory Peck), a Georgia lawyer whose family is threatened by a convicted rapist who's been released from prison. Said rapist, Max Cady (Robert Mitchum), wants vengeance on Bowden — who'd interrupted Cady's attack — for providing the testimony that helped to convict him. After a lengthy game of cat and mouse between the two, Bowden takes his wife (Polly Bergen) and teenaged daughter (Lori Martin) to their houseboat on Cape Fear in North Carolina, hoping to set a trap that will lead to Cady's re-imprisonment. Needless to say, this does not go as planned.

The film was successfully remade in 1991 by director Martin Scorsese, with Robert De Niro starring as Cady, Nick Nolte as Bowden, and Jessica Lange and Juliette Lewis as Bowden's wife and daughter; De Niro and Lewis each received Academy Award and Golden Globe nominations for their performances. In this version, Cady is out to get Bowden because the latter, while defending Cady on a rape charge, deliberately buried possibly-exculpatory evidence about the victim, leading to Cady's conviction. Both films use the music score Bernard Herrmann composed for the original.

Both films contain examples of:

The 1962 film contains examples of:

The 1991 remake contains examples of: