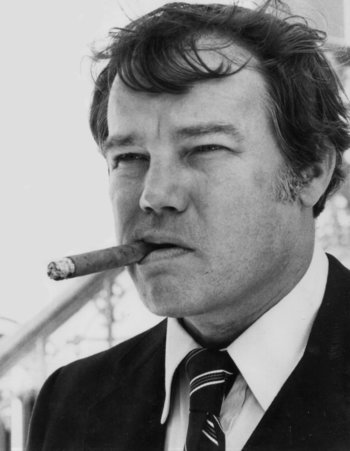 A tall, broad shouldered character actor with Texan drawl, he first appeared in support in several Western vehicles both on TV and the cinema in the mid 1960s. He got himself noticed playing Steve McQueen's younger brother in Junior Bonner (1972), and then scored the lead role of Buford Pusser (!) in the unexpected hit Walking Tall (1973), an allegedly true tale about a Southern sheriff confronting corruption and gangsters with a large wooden club and a mean attitude. Followed it up by playing a sadistic hit man called Molly, in Don Siegel's bank heist drama Charley Varrick (1973). Joe Don Baker's next few films were rather forgettable until he landed the role of police detective Earl Eischied in To Kill A Cop (1978), which led him into reprising the same character in the short lived TV series Eischied (1979). For the latter, Baker reportedly became the first television star to earn a million dollar salary.

Since then he has proved he is also quite adept at taking on comedy roles, as well as picking up plenty of work playing lawmen, military men, politicians etc. Keep your eye open for him as a nosy police chief in Fletch (1985) and as a redneck father in Mars Attacks! (1996). He also had two different roles in the James Bond films — a megalomaniacal Arms Dealer in The Living Daylights (1987) and a CIA operative in GoldenEye (1995) and Tomorrow Never Dies (1997). Baker also had a featured role on the BBC series Edge of Darkness, a performance which earned him a BAFTA nomination for Best Actor. He continued acting until 2012, when he retired after appearing in Mud.

Despite a long, successful and often acclaimed career, Baker gained unwelcome notoriety when two of his lesser-known films, Mitchell (1975) and Final Justice (1985) appeared on the movie-mocking show Mystery Science Theater 3000. A longstanding Urban Legend insists that Baker hated MST3K's treatment of his films so much that he threatened to kill the crew, but according to Joel Hodgson, Baker's actual reaction was less extreme: he objected to the show aiming its jokes at him rather than the characters he played, but harbored no serious grudge against them.