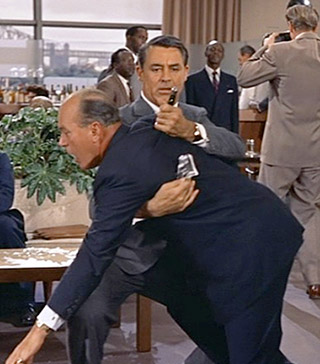 How to turn from Innocent Bystander to Fugitive in a second.
"You know what this murder weapon needs? My fingerprints!"
— Unskippable's commentary on The Getaway's use of this trope
Advertisement:

A person not only is the first to find the body, but takes that extra little bit of effort necessary to get their fingerprints all over the murder weapon lying right next to the bloody body. Preferably they do this while an unrelated person is walking by so they can see the innocent person with a bloody knife in his hand staring at a dead body with a giant knife wound in it. This behavior might be justified if the finder thinks the killer might still be in the vicinity and grabs the weapon for self-defense purposes, but no one ever seems to consider that explanation.

In a similar situation, if present during the murder, the killer will hand the dupe the murder weapon (while the killer is wearing gloves or made other precautions) to invoke this.

As a general rule, this trope only applies to the actual murder weapon. Characters who are just holding random implements for whatever reason more clearly fall under The Corpse Stops Here.

This is Truth in Television, of course; If you find the victim of an attack, whether they're alive or not, and if there's a weapon present, under no circumstances should you touch it.