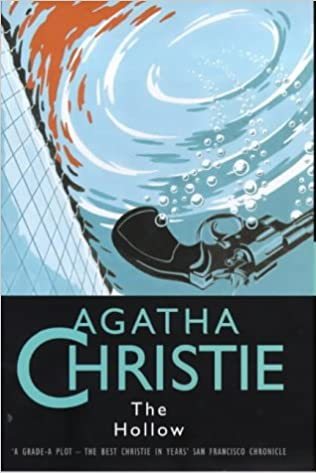 The Hollow is a 1946 mystery novel by Agatha Christie.

Sir Henry and Lady Lucy Angkatell host some guests at their mansion, The Hollow, for a weekend. Among their guests are Dr. John Christow, a friend of the family, and Christow's meek, submissive wife Gerda. Also coming for the weekend is Henrietta Savernake, a cousin to the Angkatells, and mistress to Dr. Christow.

Inviting a husband, wife, and husband's girlfriend on the same weekend might be uncomfortable, but everybody seems to have turned a blind eye to the situation. However, a complication arises in the person of Veronica Cray, yet another lover of John's. It seems that fifteen years ago, John Christow and Veronica Cray met in an exotic tropical location and had a passionate fling. Veronica, a famous Hollywood actress, still carries a torch for John and has rented a cottage next door to The Hollow so that she can see him again. John goes over to Veronica's place and they have sex, but the next morning he tells her that he won't leave his wife.

Later that day John is shot and killed by the Angkatell swimming pool. The murder is investigated by the last guest to arrive at The Hollow that weekend—Hercule Poirot, the famous Belgian detective.

A theatrical adaptation by Christie (minus Poirot) premiered in 1951.