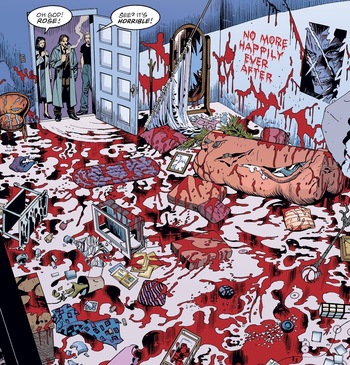 A common tactic for fictional criminals (especially murderers) is to plant false clues at the scene of their crime, either to deliberately frame someone else or merely to throw suspicion away from themselves. Sometimes, however, they take things too far and the sheer amount of clues they plant has the opposite effect. No detective will believe that any criminal could be so careless as to leave that much incriminating evidence behind. He may also be suspicious because his investigation seems to be turning up all this evidence far more quickly and easily than is usual for this kind of case. Alternately, the quantity of evidence isn't the problem; the problem is the plausibility of the EXISTENCE of the evidence, or the investigator's ability to find the purported evidence (the latter usually leads to either a Detective Mole or a The Bad Guys Are Cops situation, although that can be avoided in the case of evidence that shows up after a thorough search in a place already searched).

In Real Life, of course, this is unlikely to work as it does in fiction.note i.e. in Real Life, the police will likely fall for it. Any defense made in court that "I wouldn't be that stupid" is completely hopeless. Even if you prove to the court that you have an IQ of 200, any cop will have seen so many Stupid Crooks leave ridiculous amounts of evidence that they're likely to believe you did the same. The reason in fiction that the detective doesn't believe the evidence is generally that the detective is very experienced; the amount of evidence they find is so disproportional to the norm that it not only strikes them as unusual but implausible. That's why they start to suspect that it was planted deliberately. A Signature Item Clue may be what is used in these. If it does end up leading back to the real culprit, see Revealing Cover Up.

Compare and contrast Suspiciously Clean Criminal Record, which looks suspicious because it's overwhelmingly exonerating, and Absence of Evidence, where the lack of evidence is in itself suspicious.