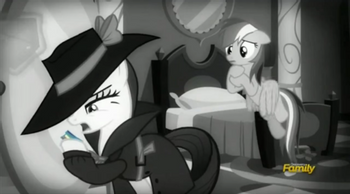 "Detective Rarity is on the case, and we are going to get to the bottom of this faster than my costume change!"
Rarity: [narrating] Rainbow Dash was questioning my methods. But I knew what I was doing.
Rainbow Dash: Do you?
Rarity: Oh, oh, oh. Did I say that one out loud?
Story by Meghan McCarthy, M.A. Larson, Joanna Lewis, and Kristine Songco
Written by Joanna Lewis and Kristine Songco
Advertisement:

At Canterlot Carousel, Rarity is putting the finishing touches on her new display — a fashion line inspired by fictional detective Shadow Spade — when Rainbow Dash barges in, making a mess of things. As they clean up, an apologetic Rainbow explains to Sassy Saddles her purpose in Canterlot. She is the backup flier at the Wonderbolts' aerial show taking place the next day, ready to fill in if one of the scheduled flyers cannot participate. That evening, Rarity and Rainbow attend a reception at the castle and encounter Wind Rider, a legendary Wonderbolt veteran whose long distance speed record still stands, though Spitfire notes that Rainbow has a good shot at someday beating it. To Dash's overwhelming excitement, she learns that Wind Rider will be coming out of retirement to perform at the show.

The next morning sees Spitfire absent from practice; Soarin explains that Spitfire's mother, Stormy Flare, sent a note to tell her daughter that she was ill, and that Spitfire has gone home to look after her. Rainbow eagerly takes Spitfire's spot in practice, with Rarity watching from the stands. However, everypony is confused when Stormy Flare shows up, perfectly healthy and with no knowledge of ever sending the note. Rarity suggests that somepony may have sent Spitfire a fake note, and Soarin' reasons it must have been to get her out of the show. All eyes promptly fall on Rainbow, who had a room right next to Spitfire's in the castle and is the one with the most to gain if Spitfire cannot perform. Soarin' challenges Rainbow Dash to demonstrate her innocence if she is to fly with them — and warns her that if she did send the note, she will be permanently kicked out of the Wonderbolts!

Rarity dons an appropriate Shadow Spade outfit and takes over the investigation. In Spitfire's room, Rarity finds the envelope from the note containing a lock of Rainbow's hair. She also takes note that the curtains in the dining hall have been moved. They question the guards who were watching the east tower that night, but the guards deny that they ever left their post... until Rarity applies some charm and gets them to admit they did take a small break when somepony sent them a very particular cake. Rarity and Rainbow head to a pastry shop, where the baker tells Rarity that the customer who bought the cake was dressed to conceal his or her identity; however, the customer was wearing a scarf that became stained by the frosting. Rainbow gets increasingly frustrated at Rarity's seemingly non-sequitur detective work, but Rarity is confident that the case is all but solved.

Rarity and Rainbow Dash return to the castle, where Rarity accuses Wind Rider of sending the note and framing Rainbow for the misdeed. Rainbow is angered at Rarity for accusing a legend, but Rarity brings up that all this time, she never believed Rainbow would send the letter and proceeds to bring up what he did. He hid behind the loose curtain in the dining hall, distracted the guards with a cake, and even planted some of Rainbow's hair on the envelope to throw suspicion on her. Rarity then brings up the clues: The hairs were cut, as proven by the straight line at the top; when Rarity smelled the envelope, she detected Wind Rider's Juniper Phoenix cologne; she noticed the loose curtain; and while Wind Rider usually ties his scarf in a Windsor knot, he has it tied differently right now. Wind Rider laughs at her accusations, but Rarity loosens his tightly-wound (silk!) scarf, revealing the chocolate stain from the frosting on the cake. Wind Rider confesses that he did it in an effort to get Rainbow Dash out of the Wonderbolts so that she could not threaten his record. He insists that a little dirty play is justified in the name of success, but Soarin' and the other Wonderbolts disagree. Meanwhile, Rainbow quickly flies off to retrieve Spitfire, who promptly strips Wind Rider of his status as a Wonderbolt and kicks him out of the show. Rainbow Dash is given the position of honor in his place, while Rarity is satisfied that she helped clear her friend's name.