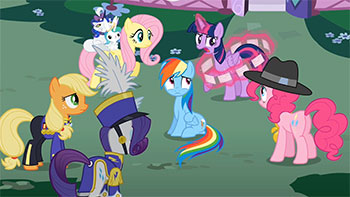 Rainbow Dash must pass a history test on the Wonderbolts to become a part of the Wonderbolts Reserves, which will allow her to live out her dream of becoming a Wonderbolt. However, Rainbow is not taking it seriously, to Twilight Sparkle's increased annoyance. While Rainbow is confident, Twilight insists that Rainbow study for her test, and offers to tutor her. In her library, Twilight tries various methods to get Rainbow to learn: they try highlighting key phrases in a history book, but Rainbow highlights every line of text and doodles; Twilight tries lecturing, but Rainbow goofs off behind Twilight's back; Twilight even tries flash cards, but Rainbow just blows spit wads at her. Finally, Twilight gives Rainbow a pop quiz on what she's already covered, which Rainbow bombs, prompting the flyer to finally realize she's in danger of failing.

Outside, while Twilight and Rainbow argue about the importance of learning history, Fluttershy appears, offering a different way of studying. She and Spike put on a play about Equestrian history with their pets, which ends in disaster when the stage falls apart. Pinkie Pie tries rapping about the Wonderbolts' history, but Rainbow can't remember anything important. Rarity tries a fashion show of the Wonderbolts' costume history, but it overwhelms Rainbow. Finally, Applejack says that she only picked up her knowledge of apples from a lifetime of learning and doing work in the field, but Rainbow reveals she only has twelve hours before the test. The other members of the Mane Six offer to try their methods again, even arguing among themselves, before Rainbow shouts at them all to stop, condemning herself to failing and flying off.

Twilight follows Rainbow Dash, trying to convince her to not give up, when Rainbow suddenly shoves Twilight through the air, out of the way of a passing helicopter. Rainbow reveals that she constantly scans the area around her while flying, careful to pick up any sights and sounds around her, in order to be the best possible flyer that she can be. Twilight gets a sudden inspiration and flies off, leaving Rainbow to sulk on a cloud. At the library, Twilight calls on her other friends to help Rainbow Dash learn her own way. Twilight soon returns to Rainbow, asking to go on a quick fly with Rainbow, who is still sulking and resigned to failing. Upon landing at Rainbow Dash's house, Twilight asks what Rainbow remembers about the flight. Rainbow doesn't remember anything particularly notable... except all of the history of the Wonderbolts that she'd been unable to learn up to that point. Twilight had enlisted the help of the rest of the Mane Six, as well as all of Ponyville, to put on a demonstration of Wonderbolt history on the ground while she and Rainbow flew, which helped Rainbow learn.

Twilight writes in the Mane Six's journal that everypony is unique, and thus has to learn things in their own unique way. Rainbow Dash takes her exam and is ecstatic to receive a perfect score.