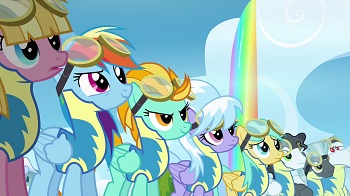 Looks like someponies feel the need... THE NEED FOR SPEED.
Spitfire: Well, lookie what we got here. Bet y'all think you're Wonderbolt material, don'tcha?
All cadets: Yes, ma'am!
Spitfire: Think you got what it takes to be an elite flyer?
All cadets: Yes, ma'am!
Spitfire: Well, then, let me be the first to tell you: You don't! If you had what it took to be an elite flyer, you'd already be a Wonderbolt!
Advertisement:
Written by Merriwether Williams

Rainbow Dash finally gets to live her dream of training for the Wonderbolts when she receives an acceptance letter for a week of boot camp at the Wonderbolt Academy. There she becomes fast friends with Lightning Dust, a hyper-competitive pegasus cadet in her class who manages to keep up with her as they leave the other cadets in the dust while flying laps. For their first exercise, the cadets are strapped to the Dizzitron, a device that dizzies them up to test their flight recovery. Rainbow Dash sets an Academy record by recovering in 6 seconds, while Lightning Dust clocks in a close second at 6.5 seconds, but not before requesting the Dizzitron to be set at max speed.

Judging from the test results, Wonderbolt captain and instructor Spitfire pairs the cadets into teams of a leader and a wingpony the next day. Rainbow Dash is confident her record flight has earned her the rank of leader, but is devastated to find she's been made Lightning Dust's wingpony. She complains to Spitfire about it, but the captain shrugs her off, saying that she thinks Lightning Dust is better leader material because she pushes herself more.

Things take a disastrous turn when Lightning Dust coerces Rainbow Dash into helping her make a tornado to speed up a cloud-busting exercise, only for the tornado to spin out of control. To make matters worse, the rest of the Mane Six happen to be taking a Twinkling Balloon ride nearby to deliver their friend a care package (at Pinkie Pie's insistence), and are sucked into the tornado. With the help of the other cadets, Rainbow Dash saves her friends from certain doom. Rainbow Dash then blows up at an indifferent Lightning Dust for constantly endangering everyone's safety with her carelessness. Lightning Dust smugly retorts that Spitfire still made her team leader, so Rainbow Dash decides to give Spitfire a piece of her mind after she tells that the dangerous tornado nearly took out her friends:

Advertisement:
Rainbow Dash: No disrespect, ma'am, but there's a big difference between pushing yourself as hard as you can and just being reckless. And if being reckless is what gets rewarded around here, if that's what it means to be a Wonderbolt, then I don't want any part of it.

With that, Rainbow Dash plunks her badge down on the desk and dejectedly returns to her friends, certain her dream of being a Wonderbolt is over... when Spitfire catches up and admits that Rainbow Dash made a valid point about pushing oneself. As such, she forces Lightning Dust into the open and unceremoniously tears off the lead pony badge. Once Lightning Dust has left, crushed and devastated, Spitfire gives it to the more deserving, ecstatic Rainbow Dash. Rainbow Dash proudly flies off with her class to finish their training (all while Pinkie complains that Rainbow Dash never opened her care package).