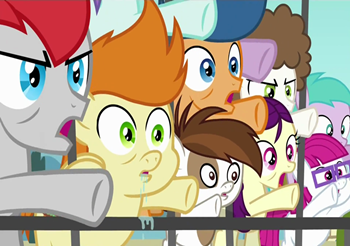 They're coming to get you, Twilight.
Sweetie Belle: Relax. I know exactly how to handle this.
Written by Dave Polsky
Advertisement:

Twilight is helping the Cutie Mark Crusaders learn various new skills, once a week, with some personal "Twilight Time". Apple Bloom is working on a potion, Scootaloo is trying to disassemble and reassemble a unicycle, and Sweetie Belle is learning how to use her unicorn magic. Later on, at the schoolyard, Diamond Tiara shows off her amazing physical abilities to a crowd of school fillies (by having her butler, Randall, do them for her) and boasts of the celebrities she hangs out with in Manehattan. The Crusaders retort that they are close friends with Princess Twilight, which instantly wins Diamond Tiara and Silver Spoon's respect and admiration. Sweetie Belle talks Apple Bloom and Scootaloo into letting the bullies come along to the next "Twilight Time," despite their misgivings.

The next day, the Crusaders return to find the entire class wanting to share in Twilight Time, thanks to Diamond Tiara and Silver Spoon spreading the word. The Crusaders are suddenly the most popular kids in their class. To maintain their new image, the Crusaders invite Twilight to the town's Hayburger restaurant, claiming it's the princess' favorite hangout. As the other school kids try to take photos with Twilight, she says she only came to the Hayburger because the Crusaders asked her to. This gets the other kids to believe that the Crusaders help influence Princess Twilight, and their newfound popularity grows even stronger, with the schoolkids even doing favors for the Crusaders and inviting them to various parties around town.

At a private pool party, the Crusaders attempt to leave for Twilight Time without any of the other schoolkids, but their classmates pursue them. The Crusaders run as fast as they can to the Golden Oaks Library to explain things to Twilight, but the other kids arrive first. When Twilight answers the door, she sees an eager pony mob and is delighted that so many youngsters want to learn new things. Unfortunately, Pip reveals that the Cutie Mark Crusaders were exploiting their connection with her to get favors from the other youngsters. Twilight, now wondering if the Crusaders ever had a genuine interest in learning, tells them to show her their progress — but the results are a disaster: Scootaloo fails to reassemble Pip's scooter, Sweetie Belle tries in vain to make a broom fly, and Apple Bloom's potion makes a full-grown apple grow to enormous size and explode. Diamond Tiara mocks their failure, but Twilight immediately points out that none of the other youngsters were there to learn from her either. Now alone with the princess, the contrite Crusaders successfully demonstrate all of their talents on a smaller scale, which wins Twilight's forgiveness and the continuation of Twilight Time.

Later, Sweetie Belle writes in the Mane Six's diary that they tried to be special because they knew someone special, forgetting why Twilight is special: because she's their friend. After another round of Twilight Time, the Crusaders leave... dressed in ridiculous disguises so nopony will recognize them.