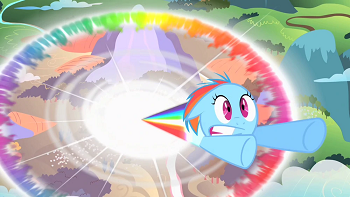 The Cutie Mark Crusaders go zip lining in another attempt to get their cutie marks (which ends with the fillies in freefall over a tree after their zipline snaps) and end up covered in tree sap again. It happens a lot. Apple Bloom decides it's time to go see somepony else for cutie mark advice, and Scootaloo has just the pony in mind:

With her scooter hitched to their little red wagon, Scootaloo proceeds to lead the other two into town, running into the other main cast ponies along the way and learning that Rainbow Dash is likely hanging around Sugarcube Corner. Their stories are as follows...

Applejack: As a young filly, Applejack didn't want to spend her whole life on the apple farm, so she set out to live with her sophisticated Aunt and Uncle Orange in the big city of Manehattan. After a short time acting and living as a sophisticate (helped very little by the size of her dinner portion), Applejack started to feel uncomfortable and homesick. One morning, while looking wistfully out the window, she saw a rainbow leading back to Ponyville. Taking this as a sign, she headed home to Sweet Apple Acres, where she discovered that she had earned her cutie mark by embracing her apple-farming heritage.

Fluttershy: When Fluttershy was at summer flight camp, she was the weakest flier out of all the young pegasi there. As such, she was bullied a lot, until one day when Rainbow Dash stood up for her, challenging the bullies to a race. During the race, Fluttershy was knocked off a cloud and sent plummeting towards the ground below, only to be saved by a swarm of butterflies. Having never met earth animals before, the young pegasus was instantly enraptured, but a sudden explosion scared them all away. Fluttershy carefully coaxed them out of hiding, discovering her instinctive rapport with animals (and her cutie mark) in the process. Though she never found out what happened with the pegasus race...

Rarity: While the young unicorn was trying to perfect costumes for a school play, her horn's magic activated and began pulling in the direction of some mysterious source (dragging the rest of Rarity along with it). When it finally came to rest, she found herself standing in front of a huge rock in the middle of nowhere. She found this destiny underwhelming to say the least, until a nearby explosion broke it open and revealed that it was full of colorful gemstones. Inspired, she incorporated the gems into her costumes, wowing the crowd and earning her cutie mark.

Twilight Sparkle: Inspired by the sight of Princess Celestia raising the sun in the Summer Sun Celebration Twilight resolved to learn all she could about magic. Her parents decided to enroll her in the princess's special academy for talented unicorns. While Twilight was excited at first, she was nervous at the thought of passing the entrance exam. During the exam itself, she was set the task of hatching a dragon egg, and all her best efforts failed her. Just as she was about to admit defeat, a far-off explosion startled her into losing control of her magic. The egg hatched (revealing a certain purple-and-green baby dragon...), but her uncontrolled magic ran wild, causing chaos in the examination room. Celestia herself intervened, calming Twilight down and offering to become her personal mentor to help the young unicorn tame her astonishing powers. Topping off this amazing day was the appearance of Twilight's new cutie mark.

Pinkie Pie: Back when Pinkie was a filly, she lived a dull, humorless existence on a rock farm with her family. One day, an explosion shook the farm (and her ramrod-straight mane and tail), followed by a rainbow. The beautiful sight of the rainbow was enough to make Pinkie smile for the first time, and she was determined to make everyone around her just as happy. So, the next day, she threw her very first party just for her family. The results made her parents and sisters smile for the first time, giving Pinkie her new purpose in life and her cutie mark.

Pinkie Pie: ...and that's how Equestria was made!
Scootaloo: Wha...huh?!

Rainbow Dash: During the aforementioned race with the bullies at flight camp, Rainbow Dash discovered she had a real need for speed, and an even greater need to win. In an attempt to get herself ahead of one of her opponents, she flew faster than ever before, creating the very first Sonic Rainboom in the process. Needless to say, this impressive maneuver won Rainbow the race and her cutie mark.

At this point, the main ponies besides Rainbow Dash realize certain similarities in their stories, and come to the conclusion that the Sonic Rainboom that led to all of their cutie marks was thanks to her. With this realization, the main ponies all share a group hug. While Apple Bloom and Sweetie Belle are heart-warmed by the stories and the love the main cast show each other, Scootaloo remains unimpressed, and much to her dismay, she too is dragged into a hug with her friends. Twilight's letter to Celestia says that she learned that you may not be as alone in this world as it feels, and that your future friends may be closer than you think.

... and that's how Equestria was made! Maybe one day we'll tell you about how Pinkie Pie got her Cutie Mark! It's a real gem!
Feedback

When Fluttershy suggests a song, Scootaloo isn't happy about it.

When Fluttershy suggests a song, Scootaloo isn't happy about it.