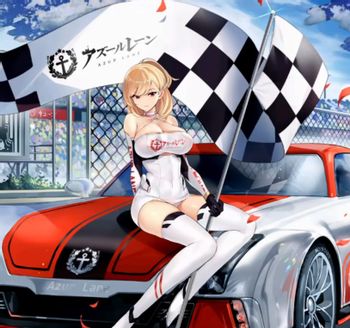 She's holding the card, waving the race flag, or handing out the trophies with the accompanying bouquet. She's not participating in the sport (at least not on the front lines). She is, however, not wearing very much. In Japan, she's called a "Race Queen" and these girls are usually also some form of Idol. Their official job description is holding an umbrella for the driver but that's obviously not the only reason they are there.

Sex Sells, after all.

Similarly, many combat sports such as boxing and mixed martial arts have "ring girls" whose job it is to provide a bit of Fanservice between rounds. They usually will carry a poster-sized card signifying the round number.

Some see the presence of these women as problematic for a few reasons. Without entering that discussion, it should be worth noting that these women have a job, modeling, and that job takes a great deal of work that has to be done off-camera.

Compare with Hood Ornament Hottie. Not to be confused with that kind of pit.