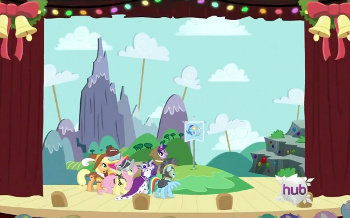 And that's how Equestria was made! Close Curtain!
"I can't believe that Princess Celestia chose us to put on the most important play of the season! Do you guys know what an honor this is? For all of us?"
— Twilight Sparkle
Written by Merriwether Williams
Advertisement:

The episode begins with the main characters taking the Friendship Express Train to Canterlot, where they are performing in this year's Hearth's Warming Eve pageant. Despite some backstage bickering over an open window, the mane six quickly start the show...

Once Upon a Time, the Pegasi, Unicorns, and Earth Ponies hated each other. The Pegasi, led by Commander Hurricane (played by Rainbow Dash), believed themselves superior because they could control the weather. The Unicorns, ruled by a king who is represented by his daughter Princess Platinum (who the king is and why he didn't come himself is never explained)(played by Rarity), believed themselves superior because they had magic, which they used to move the sun and moon. Both tribes demanded food from the Earth Ponies, led by Chancellor Puddinghead (played by Pinkie Pie).

One year, an inexplicable blizzard came to their land, and the ground was frozen so hard that the Earth Ponies could not cultivate. Neither the Pegasi nor the Unicorns could banish the storm, so the three clans held a summit, trying to figure out a solution. But with the storm raging outside reflecting the ponies' conflict inside, it didn't take long for the leaders to angrily give up and return home. The second-in-commands of each group — Pegasus Private Pansy (Fluttershy), Unicorn vizier and student of Starswirl the Bearded Clover the Clever (Twilight Sparkle), and Earth Pony secretary Smart Cookie (Applejack) — were disappointed at the news.

Individually, each leader decided to leave their desolate wasteland and find a new realm to live. The parties soon found a beautiful paradise with a diverse landscape, beautifully thick clouds, and fertile soil. Unfortunately, they had all chosen the same land, and soon the fighting between the three leaders resumed with increased fervor. As their bickering increased, the blizzard they had left behind started up once again, forcing the six ponies to seek shelter in a cave.

Even the plight of their situation didn't deter the hostilities; as the blizzard grew worse, the leaders' petty bickering continued, until the ice encroached so far into the cave that the commander, the princess, and the chancellor were frozen over in mid-rant. Unfettered by their bosses, the seconds admitted that they had hoped for peace and friendship. Clover the Clever realized that the blizzard was created by windigos, supernatural creatures that thrive on hate and fighting, and that the coldness of their hearts had brought the disaster on themselves. Just as the ice was about to completely imprison the seconds, the spark of their friendship suddenly ignited, saving them and driving back the windigos.

Seizing the opportunity, the three nurtured the warmth of their friendship with stories and laughter and singing, eventually thawing out their leaders. With everypony realizing that friendship and cooperation succeeded where arguing and fighting had not, the three tribes agreed to come together in harmony, thus forming Equestria on the principle that all ponies are equal. Cue a closing song, the curtain call, and enthusiastic applause from the audience.

Afterwards, the backstage happiness of the mane six is soured when the still-open window leads them to start bickering over who's at fault. The wind suddenly howls, reminiscent of the windigos. Rainbow Dash quickly closes the window as everyone share a laugh, as the Hearth's Warming magic floats over Canterlot.

Note: This is the thirteenth episode of the second season, but was the eleventh aired.

... and that's how Pinkie Pie got her Cutie Mark! Maybe one day we'll tell you about how Equestria was made! It's a real gem!