Literature / The Journal of the Two Sisters 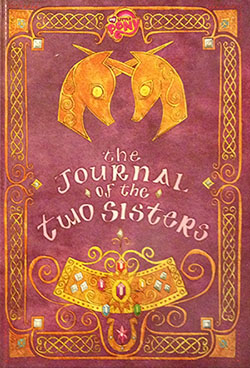 The Journal of the Two Sisters: The Official Chronicles of Princesses Celestia and Luna is an officially licensed companion book to the My Little Pony: Friendship Is Magic series written by show writer Amy Keating Rogers, designed to be a Defictionalization of both the Journal of the Two Sisters and the diary Twilight Sparkle and her friends were writing throughout Season 4 of the show.

It could be seen as a sequel to the Elements of Harmony reference book with a similar cover design and production values, though instead of a guide to the show it functions more as a totally 'In Universe' book.

As such the first half of the book consists of diary entries by Celestia and Luna, depicting the events of the start of their rule over Equestria and their struggle to find their place in the new kingdom they have created. The second half consists of the letters written at the end of each episode of season 4, expanded and illustrated.

The Journal of the Two Sisters provides examples of the following tropes: