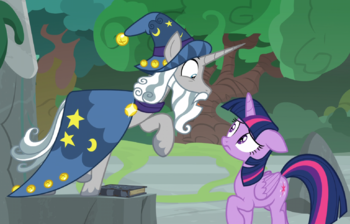 They say never meet your idols... especially if they were holding closed a thousand-year seal.
Applejack: Hold on a second now. All those legendary ponies were real, too? And they went off with Starswirl to face the Pony of Shadows, and then none of them were ever heard from again?
Pinkie Pie: Uh, yeah. Weren't you listening?
Story by Josh Haber
Written by Josh Haber & Nicole Dubuc
Advertisement:

A voice is narrating a story from long ago, speaking of a time when six ponies came together to guard Equestria from evil. They became known as The Pillars, each representing a trait similar to those embodied in the Elements of Harmony.

Originally brought together by a small unicorn colt, they later came to believe that they had been betrayed by him and cast him out. The rage and exclusion he felt transformed him into a beast of shadow, which the six had to battle. In order to spare the land, they sacrificed themselves to seal this evil shadow pony, leaving behind a seed of hope to maintain the peace.

Reaching the end of the story, it is revealed it was Sunburst who was reading the story to Princess Celestia and Luna out of the black book he obtained by purchasing the blind buy barrel at the antique shop. The words were of Starswirl the Bearded, the legendary unicorn sorcerer and inventor of modern pony magic, which comprised the last entry in his journal prior to his disappearance. Twilight Sparkle offers to translate the journal from historical Ponish in order to learn of the final fate of the great sorcerer and his fellow Pillars of Equestria.

Back at Twilight's castle, the Mane Six and Sunburst have spent days trying to unravel the mystery but are making minimal headway at best. Starlight decides to take a look at Starswirl's journal and discovers she can read his scrawl as her own is quite bad as well, which allows Twilight to translate what she reads. The words read that Starswirl and his fellow Pillars were planning to make their final stand against the Pony of Shadows at the Temple of Ponehenge. The eight ponies travel to the site of the temple to investigate further. They survey the site but realize there isn't much they can do so long after the fact. Twilight sets the journal down on one of the seats surrounding the central fire pit.

As Twilight turns away, Spike notices the journal is glowing. The book opens by itself and a projection of Starswirl the Bearded appears from its pages. Projections of the other Pillars of Equestria appear on the remaining five seats; Rockhoof, Mage Meadowbrook, Somnambula, Flash Magnus, and Mistmane. Finally a projection of the Pony of Shadows is created in the center and the projections all begin to move, depicting the final struggle between the Pillars of Equestria and the Pony of Shadows that lead to their collective sealing. Once the sealing is completed, projections of six objects fall to the seats of the temple then the book closes by itself. Sunburst surmises that the magic that was used at Ponehenge was so powerful it left mystical echoes of the events of the spell that was cast.

The team returns to Twilight's castle, satisfied they now know the fate of the Pillars of Equestria. Sunburst says he'd love to know what Starswirl did to seal the Pony of Shadows but that kind of information would require years of research to demystify. However, Twilight, ever the diligent researcher, manages to do so merely in the time since they returned. She excitedly gathers everypony in the map room to explain the sealing spell, telling her friends that Starswirl sent the Pony of Shadows to Limbo and were forced to go there with him in order to make it work, and that she now thinks she has the key to undoing the sealing spell, thus bringing back the Pillars of Equestria to the modern day as though no time had passed.

The secret lies with finding artifacts from the Pillars that were connected with their lives. Twilight reads from the journal but in doing so, magical images of the artifacts appear over the map. The ponies split up and seek out the artifacts. Applejack's journey takes her to an excavation site where saving the researchers from being crushed by a boulder reveals the way to Rockhoof's shovel, along with helping to affirm the truth that Rockhoof once did exist. Rarity travels to the garden of Mistmane, which is now being maintained by one of her descendants. The garden has fallen into disrepair but Mistmane's flower remains, which is jealously guarded by the caretaker. Rarity helpfully cleans up the garden in order to stir up business once again and the grateful caretaker offers Mistmane's flower in exchange. Rainbow Dash and Spike fly out to the Dragon Lands to discover that Garble has been using Flash Magnus's shield for gorge surfing after having found it some time ago. He challenges Spike to a gorge boarding race for the artifact, to which Spike manages to win. Garble attempts to renege on the deal and attack Spike but Rainbow Dash intervenes. Garble challenges her to a race back up the mountain for the same stakes but Dash tricks him into setting down the shield before flying back up, allowing her to simply take it and leave.

Fluttershy returns to the bayou where she met Cattail and helps him distract the flash bees so she can move their hive higher up the tree and allow the bayou animals who live at the bottom to get water in peace. Cattail says he'd offer to lend Fluttershy Meadowbrook's mask without needing her assistance but she says she wanted to do some good on her trip out to the bayou. Finally Pinkie Pie returns to the pyramid of the sphinx and, with the help of Daring Do and the Somnambulans, manages to pull Somnambula's blindfold from the pit of green goo.

Meanwhile, at the Temple of Ponehenge, Twilight, Starlight, and Sunburst are preparing to unseal the Pillars of Equestria. Starlight has some doubts in the rationality of undoing the spell but Twilight and Sunburst reassure her with various arguments that this is the right course of action. The other five return from their voyages with their artifacts and set them down on the seats surrounding the central pit. Twilight, Starlight, and Sunburst amplify Starswirl's journal with their own magic, causing the journal to magically link with the other artifacts and pull the Pillars of Equestria back into reality.

Twilight introduces herself to her idol but Starswirl is less than enthusiastic and immediately demands Twilight undo her work. Twilight says she doesn't want to but Starswirl alarmingly informs her that bringing them back also means that they released the seal on the Pony of Shadows, who manifests once more in front of them...