Recap / My Little Pony: Friendship Is Magic S7 E18 "A Health of Information" 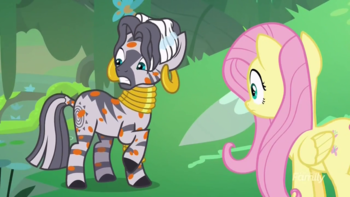 "I can't believe a flower did this. I take back thinking it was pretty!"
Fluttershy: Zecora-has-Swamp-Fever-and-there's-no-cure-and-it's-all-my-fault-and-the-only-pony-who-can-cure-it-is-the-Mystical-Mask-and-I-need-your-help-to-find-her!
Twilight Sparkle: Uh...
Written by Sammie Crowley and Whitney Wetta
Advertisement:

Fluttershy and Zecora visit a swamp to gather supplies for Fluttershy's animal sanctuary. After Zecora slips and falls in the water, a flower on a lily pad emits a burst of pollen that causes her to break out in a red rash. By the time Fluttershy gets her back to Ponyville to see a doctor, she has started coughing up bubbles. The doctor diagnoses her with swamp fever, a disease that has no known cure and that eventually causes its victims to turn into trees. Fluttershy resolves to find a cure and save Zecora, believing that the legends of a healer known as the "Mystical Mask" must be true.

She drafts Twilight Sparkle to help research the legends, but they come up with nothing after several hours in Twilight's library. Twilight goes to bed while Fluttershy keeps working all night; the next morning, a fatigued Fluttershy wakes Twilight with her conclusion. The Mystical Mask was Mage Meadowbrook, who lived in Hayseed Swamp long ago. The two immediately set out for the old village and find it deserted except for Meadowbrook's descendant Cattail, who has kept an eye on her old house. In one of her old journals, Fluttershy finds her experience with a swamp fever epidemic. Seeing that flash bees were immune to the disease, she determined that their honey could provide a cure, but the bees proved highly aggressive in defending their territory. The journal ends with Meadowbrook successfully curing the epidemic, but gives no details of how she finally got the honey.

Fluttershy discovers that she too has contracted swamp fever, but pushes on despite her exhaustion to try and get the flash bees' honey. Cattail leads her to the hive, but her attempts to talk to the bees provoke them to sting her repeatedly and she passes out from pain and sleep deprivation. She wakes up three days later in Meadowbrook's old bed, and Cattail tells her that Zecora has started to sprout leaves and explains that he and Twilight have tried and failed to get the honey. As Fluttershy starts to despair, she notices a bee nuzzling up against one of Meadowbrook's old masks and suddenly realizes what she did. The stripes on the mask resemble the markings on the queen bee, around whom all the males become docile. When Fluttershy returns to the hive and dons the mask, the males leave her alone and she is able to retrieve the honey.

Both Fluttershy and Zecora make a full recovery, and Zecora thanks Fluttershy for all the trouble she went to in order to find a cure. Fluttershy admits that she might have succeeded sooner if she had taken better care of herself along the way. They are interrupted by the arrival of the doctor who diagnosed Zecora, asking if they have found a cure yet — because now he has swamp fever.