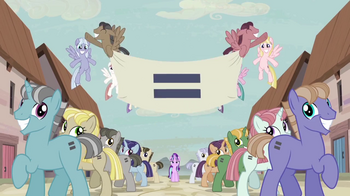 You'll love it here... or else.
"Welcome!"
— Multiple ponies in Our Town (the town itself, not the song)
Story by: Meghan McCarthy
Written by: M. A. Larson and Scott Sonneborn
Advertisement:

After the defeat of Lord Tirek and another adventure in the Human World, Princess Twilight Sparkle and friends attempt to figure out the mystery of her new castle. They are surprised that when they all sit in their respective thrones, the cutie mark on each throne lights up, activating a holographic map in the center of the hall. As they try to figure out the map's purpose, they see symbols like their cutie marks come out of the center of the map and circle about a spot to Equestria's far north. They agree that the map seems to indicate they should check it out. Fluttershy initially plans to let the others go on without her to keep Spike company, until Spike indicates he's planning to spend the weekend talking Hoofball with Big Macintosh. Before long, all of the Mane Six have set off for the distant town.

At the end of their trek, they discover a small town with all the ponies having the same cutie mark, an equals sign. The Mane Six are concerned, and become more cautious when they see all the townsponies having the same creepy smile. They are taken to the town's leader, Starlight Glimmer, who welcomes them, with some curiosity about their cutie marks and Twilight's alicorn nature. She explains that all the ponies in the town have given up their cutie marks via the use of the Staff of Sameness, opting to be equal and the same, so that they can bask in the camaraderie that comes from everyone being the same, with the cutie marks being stored in a vault a short distance from town.

The Mane Six, outside of Fluttershy, remain distrustful and decide to stay to figure out what is going on. They opt to take in a meal from the local baker, Sugar Belle, who is surprised that not only that the group bickers over a petty argument, but quickly apologize and make up for it afterwards. Noting that other ponies, like Double Diamond, are keeping close tabs on the actions of the Mane Six, Sugar Belle whispers for the Mane Six to meet her in her store's basement after they finish. There, she, Night Glider, and Party Favor all express their elation to see ponies still with their cutie marks and able to live happily with their differences, and their wish to be reunited with theirs. When Rainbow Dash suggests they go do so, they point out Starlight wouldn't approve, and that they can visit their cutie marks at any time in a vault where all the village ponies' cutie marks are kept for them to visit at any time.

The Mane Six are able to convince Starlight to take them to the Cutie Mark Vault. Too late the Mane Six discover it is a trap, and before they can escape, Starlight uses the Staff on them, locking their cutie marks away in the vault and assuring them they will be part of the town, whether they like it or not.