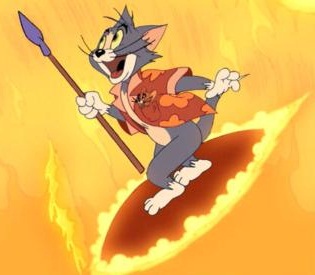 Don't wipe out.
"Like, check us out, Scoob! We're hanging ten! Ulp, ten thousand degrees Fahrenheit that is!"
— Shaggy, Scooby-Doo! and the Samurai Sword
Advertisement:

This trope is when characters ride on lava.

They usually surf on a floating rock that happens to be nearby, or something flat they happen to have with them, unless they're so cool they don't need any of those things. If the heroes are in the Lethal Lava Land or stuck near Chekhov's Volcano, you can bet this is how they will escape. (Magma Men tend to do this a lot.) Sometimes, the object being used to surf will start to burn up or melt, making the surfer find another board.