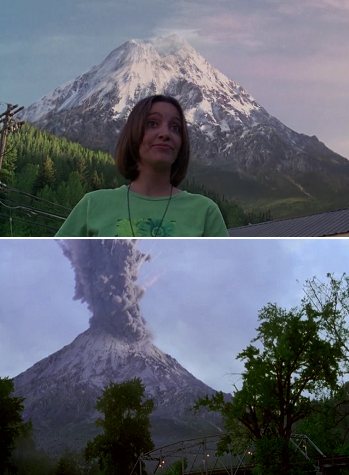 Mountain see, mountain boom.
"And to top it all off,
The volcano erupts!"
— Trouble In Tahiti, describing a tropical Cliché Storm
Advertisement:

If ever a volcano appears in a work of fiction, it's going to erupt. The existence of a volcano is, in itself, a Chekhov's Gun. There's no sense in having it around unless it explodes, because otherwise the story is robbed of a clear dramatic conflict. (Unless you're just planning to have an awesome climax fight over the roiling magma which all dormant volcanoes are filled with. Or, if Mt. Fuji is involved.)

This is especially to be expected if a volcano is explicitly not supposed to erupt, thereby surprising everyone and driving them into a panic. The likelihood goes up further still whenever someone asks whether or not the volcano will explode, and is weakly comforted by the other person saying "Oh, it's not going to erupt. It's inactive. Do you have any idea how unlikely an eruption would be?"

Obviously Truth in Television. Volcanoes (even dormant ones — there's a reason they're called dormant and not dead) are very dangerous things and can go off without warning, which is why most governments monitor active volcanoes within their territory.

Mount Fuji, a national symbol of Japan, is a notable exception; since nobody ever makes a big deal about Mt. Fuji being a volcano, it's rarely a plot point. The same goes for stories set in Hawaii, with the volcanoes as major identifiers to the setting and rarely anything more than that. Let's just hope they never address the existence of a certain lake in Indonesia

or a certain national park in Wyoming

Please note that since every active volcano can potentially erupt, and every volcanic eruption was preceded by a volcano existing for millions of years, this is a virtually Omnipresent Trope in Real Life volcanic eruptions. As such, please avoid posting real life examples.

Not to Be Confused with Appease the Volcano God.