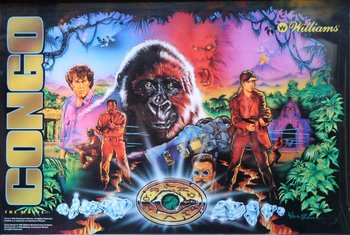 We Are Watching You
"HIPPOS!"
Advertisement:

Congo is a 1995 arcade pinball game from Williams Electronics. Based on the Michael Crichton film adaptation, it was designed by John Trudeau and illustrated by Kevin O'Connor.

As with the movie, the player is leading an expedition to Africa, and quickly runs across a lost city, a diamond mine, and lots of Killer Gorillas. Elude poisonous snakes, avoid the rabid bears, and dodge the hippo attacks on the way to Zenj. Consult the Map and decipher the hieroglyphs, then follow the lava flow around the volcano and be prepared when it erupts for multiball. For more riches, wait for the Grays to attack, then confront the giant gorilla in the lower playfield and try to collect the diamonds he guards.

Among pinball enthusiasts, Congo is the textbook example of an Acclaimed Flop — the game is highly regarded for its impressive ruleset, challenging layout, stirring soundtrack, and a bevy of toys, including a snarling gray gorilla sculpted by Stan Winston himself. However, the game is often overlooked due to the box-office failure of its license, and it had the misfortune of being released during the decline of arcade gaming in The '90s. Congo ended up as Williams' worst-selling game of the year, with only 2,100 tables made, and the game is now highly coveted among collectors as their rarity increases.