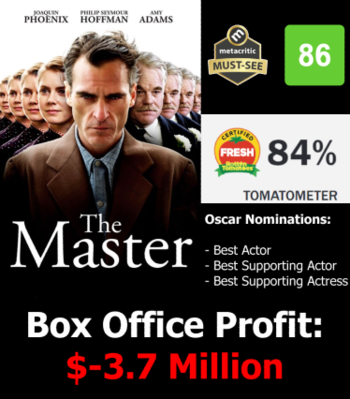 It was widely considered the best film of 2012, but the money it (never) made wouldn't tell you that.
Advertisement:

Every once in a while, some work will leave a big mark in the mind of audiences. The reviews won't give it a score under 9/10, those who saw/read/played it almost unanimously love it, and the work is acclaimed for its originality, unique artistic touch, beautiful soundtrack, etc. Everything is perfect except for one thing: few people bought or watched it. Despite its huge critical success, the work is snubbed in the stores or cinemas and only avoids fading away from public view entirely by virtue of its acclaim.

Maybe it was too original, too unique, or too controversial to appeal to a large base (and maybe deliberately so), or maybe it lacked the advertisement that big and long-installed licenses or blockbusters get. Or just got a very clumsy marketing campaign. It can also be a consequence of The Firefly Effect. But as a result of its glowing reputation, it will usually be sought after several years later by many people who overlooked it at the time, making it all the more difficult to find.

They are often Cult Classics, but a cult classic isn't necessarily successful critically and can keep a very limited fanbase.

Compare Critical Dissonance (when the opinions of critics and viewers don't match), Magnum Opus Dissonance (when the author loves the work above all else and the audience refuses to), Needs More Love (when a work is good, but ends up being extremely obscure), and Vindicated by History (when the quality of the work is only generally acknowledged many years after it came out).

Contrast Critic-Proof (where the work is commercially successful despite negative critical reception), Presumed Flop (when many people just assume a work did poorly but it wasn't the case), and Sleeper Hit (where a work that no one was expecting much from ends up being a commercial success despite the unfavorable odds).

See also Hitless Hit Album for examples of albums that caught on despite producing no hit singles.

This is not about works you personally liked that didn't get much attention. This is about works that did poorly despite being acclaimed. Also, please don't add any examples until the work's initial run has finished.