Film / Reign Over Me 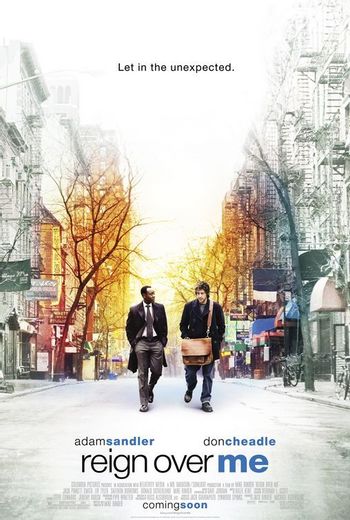 Let In the Unexpected
Advertisement:

One of Adam Sandler's rare forays outside of comedy, Reign Over Me is a 2007 melodrama about two old friends who fell out of touch and are re-united in post-9/11 New York City.

Alan Johnson (Don Cheadle), a dentist, is on his way home from work when he spots his old college roommate, Charlie Fineman (Sandler), leaving a hardware store. Two weeks later, Alan runs into Charlie again, and this time insists on catching up over a cup of coffee. The two eventually become friends again, but Charlie aggressively distances himself from Alan anytime the issue of Charlie's family comes up. It is revealed that Charlie lost his wife and daughters in the September 11 attacks as they were on American Airlines Flight 11, and that he has been having great difficulty coping with the loss.