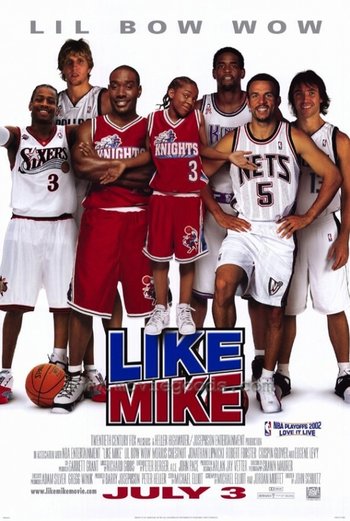 Like Mike is a 2002 comedy-fantasy film, directed by John Schultz and written by Michael Elliot, that centers around a boy named Calvin Cambridge (Lil Bow Wow), who gets basketball talents after finding a pair of Michael Jordan's old shoes.

Calvin and his best friends, Murph (Jonathan Lipnicki) and Reg Stevens (Brenda Song) live in an orphanage. Being the youngest, Murph has the closest relationship with Calvin. By night, they sell chocolate for an awkward director, Stan Bittleman (Crispin Glover), after every home game of an NBA, the Los Angeles Knights.

On one night of chocolate sales, Calvin meets the Knights' Coach Wagner (Robert Forster), who is impressed with his knowledge about basketball and his honesty about the chocolate that he offers him tickets to the next game. Later, in a thrift shop donation box, Calvin finds a pair of sneakers with the initials "MJ" and decides they were once Michael Jordan's shoes.

At the Knights basketball game, the team's star player Tracy Reynolds (Morris Chestnut) prepares for a halftime contest. Calvin's ticket number is called and he goes one on one with Tracy. Calvin ends the contest with a dunk after bouncing the ball off the backboard and Calvin joins the team.

A standalone sequel, titled, Like Mike 2: Streetball was released in 2006.