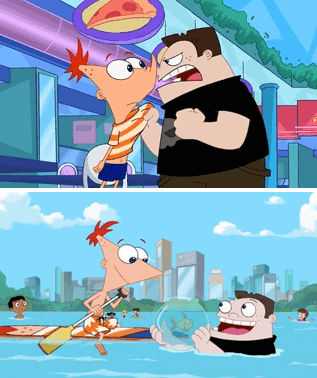 "I know we were jerks to you before, so let's start over."
— Ling to Mulan, Mulan
Advertisement:

Bullies. They're mean, they're rude, and in fiction, they're everywhere. For the character being bullied, it can usually feel like them and their bully will be bitter enemies until the end, and that they will look back and think only of the pain they were put through as a child.

And yet, bullies are people, too. With little exception, most of them are just as capable of feeling love and camaraderie as anybody else. While this can usually manifest in a Loving Bully, a Gang of Bullies, or even a Girl Posse, occasionally the bully will find friendship somewhere else- and become close friends with the very person who used to be their victim.

The reasons for this can vary. The bully could've been sympathetic all along, and the kind-hearted protagonist is willing to forgive them after they learn more about them. The bully could have had it out for the protagonist because of a genuine misunderstanding, and once said misunderstanding is cleared up, they offer their friendship to the protagonist as a way of atonement for treating them badly. The bully could've also just been a dumb kid; Kids Are Cruel, after all, and people grow up. There could be a scene of the victim finally Challenging the Bully, and winning, with Defeat Means Friendship happening in full force. Maybe they were a Peer-Pressured Bully who decided to do the right thing. Or, they just end up bonding, and the hero learns their bully is actually a Jerk with a Heart of Gold, Lovable Alpha Bitch, or Defrosting Ice Queen.

Whatever the cause, though, this scenario ends with the hero and their bully becoming good friends, despite the odds. Their friendship becomes stronger than could ever be expected at the start, even if that just means they're on friendly terms rather than mortal enemies.

Overlapping sister-trope with Reformed Bully; while many cases of this trope are Reformed Bullies, not every Reformed Bully becomes the hero's friend, and not every bully that befriends the hero is so quick to give up their bullying ways for good. It may also overlap with Bully and Wimp Pairing or Cool Kid-and-Loser Friendship. May be the result of School Forced Us Together. Compare Fire-Forged Friends, Friendly Rival, and Loner-Turned-Friend. Can overlap with Jerk-to-Nice-Guy Plot. Contrast with Former Friend of Alpha Bitch, Jerkass to One, and Schoolyard Bully All Grown Up, where the bully never changes out of their cruel ways. When it's friends who sometimes act like bullies, that's Vitriolic Best Buds or With Friends Like These...