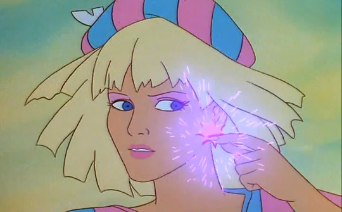 This trope is for accessories and jewelry that don't just look pretty, but do stuff! There's a common "formula" behind the making of a Magical Accessory; you take a Power Crystal with superpowers and hire the Ultimate Blacksmith to cut it and embed it into a mystic silver setting. This Super-Trope covers just about any Glowing Gem studded piece of sparkly magical jewelry that has or grants powers and effects.

Because humans are historically quite good at making bling, there's a lot of tricked-out trinkets this trope covers. From top to bottom, they are:

Occasionally, the jewelry is technological rather than magical, Sufficiently advanced technology and all that. In both cases what would normally be purely decorative is now also very powerful and useful. When the trinket isn't singular, it may be part of a pair, like earrings or sets of rings. All the pieces may be needed to get the full Set Bonus, though individual parts may keep some power. Much like the Silver Slippers in The Wonderful Wizard of Oz have to be together to grant wishes, but are individually still powerful Protective Charms. Expect there to be a Dramatic Necklace Removal at some point.

See also Clothes Make the Superman (also covers capes and scarves/shawls) and Powered Armor for when it's clothing/armor rather than jewelry. For purposes of trope differentiation, if it's jewelry it goes here, even if it's not made of gems and metal (like say an enchanted leather and bone necklace).

Compare Shoe Phone, gadgets disguised as items of clothing and other trinkets. Contrast Useless Accessory; this trope may justify the accessory-loaded design by making all of them useful in some way.