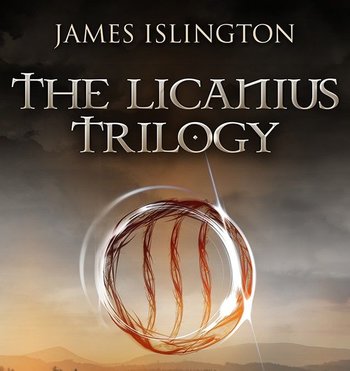 "The old saying is wrong, you know — a common enemy does not a friendship make. You can only ever be as good as the people you are willing to fight beside."
"All that I wanted, I received.
All that I dreamed, I achieved.
All that I feared, I conquered.
All that I hated, I destroyed.
All that I loved, I saved.
And so, I lay down my head weary with despair, for;
All that I needed, I lost."
― Tal'Kammar Deshrel, The Shadow of What Was Lost
Advertisement:

The Licanius Trilogy is a series of High Fantasy novels with a subversive Time Travel spin, and the authorial debut of Australian writer James Islington.

The trilogy consists of the following volumes:

The first instalment was released in 2014, and the final installment wrapped things up in 2019. Islington has announced some side stories set in the same world as the original trilogy.

In the country of Andarra, it has been twenty years since the rebellion that saw the dictatorial Augurs deposed and replaced by the previously token monarchy. While the Augurs were exterminated, the Gifted — their Essence-wielding enforcers — were spared and bound to a set of Tenets that limit their abilities and force them to obey Administration. Nobody knows who will become Gifted, but anyone who wields Essence develops a Mark and is sent to an Academy, where Elders teach them to control their power under the watchful eye of Administration. If they fail their tests, they are turned into Shadows: Powerless ex-Gifted cut off from their Reserves, who sprout black veins on their faces.

The story follows a trio from a Gifted Academy in Caladel: Davian, a bright young man with a block that prevents him from wielding Essence, his suspiciously talented Best Friend Wirr and his kind-hearted love interest Asha.

On the eve of his Trials, Davian makes peace with his inevitable failure, and enjoys a last, pleasant evening with his best friends before sleeping peacefully for the first time in months. He is awoken by Ilseth Tenvar, an Elder visiting from Tol Athian, who brings shocking news: The Boundary that has protected Andarra from Aarkein Devead's forces for 2000 years is failing, and Davian is needed to help repair it. He also knows Davian's biggest secret — That he's an Augur, with the ability to tell when anyone lies to him.

Given a mysterious glowing cube to guide his way, Davian embarks immediately to discover how he can help. Before he leaves, Wirr catches him and shakes him down for information. Unwilling to let Davian go it alone, Wirr packs his bags as well and the two head out on a secret mission to save Andarra. The next day, Asha wakes to find everyone in the Academy brutally massacred. Before she can figure out what's going on, Tenvar turns her into a Shadow and wipes her memory. Confused and heartbroken, she sets out on her own journey to find answers, unaware that she's surrounded by enemies.

Meanwhile, in the northern forests of Desriel, a young man named Caeden wakes up covered in blood with no memory of who he is. Accused of a horrifying crime, he sets out to recover his memories while avoiding the gil'shar, who want to make an example of him. Marked with the ancient symbol of a wolf's head, the mysterious nature of his returning memories only prompt more questions about his identity. And he doesn't always like the answers...

As journeys unfold and mysteries unravel, their paths cross — Through present, past and future — And the intertwined themes of morality, immortality and inevitability begin to drive the story.

The Licanius Trilogy contains examples of:

Alternative Title(s): The Shadow Of What Was Lost