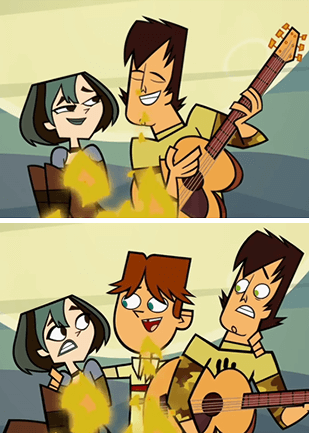 It's really going to happen this time. They are about to share their feelings with each other after years of keeping them hidden. They come closer together and look into each other's eyes; there has never been a moment so perfect. The stars are aligned, the moon is full and one of them says, "I've never had the courage to tell you this before..."

Then her brother walks into the room, asking if she wants pepperoni or ham on her pizza. Or his/her best friend walks through the door, wanting to talk to them, which sometimes may be an emergency. Or the house phone rings or one of their cellphones rings, ruining the moment. "Ugh!" is their reply, echoed by all of the fans. Whatever was there has been shot down dead. They lost the spirit of the moment and it will likely be a long time before they can get it back. After witnessing their frustrated anger, the brother then asks, "Is this a bad time?"

The Moment Killer is the bane of all shippers, and eternally frustrates those who will find any reason to hook up a favorite pairing. The moment is most commonly romantic in nature, but covers the instances whenever there is a possibility of a relationship upgrade or change, or during a serious or dramatic moment, including going from enemy to ally or getting that coveted "Well Done, Son."

The exact nature of the killer can come under several varieties:

Basic staple of any Will They or Won't They? set up. Compare Interrupted Intimacy and Instant Turn-Off. The most common subtrope is the Almost Kiss. If the moment is about to lead to a declaration of love, then it might be an Interrupted Declaration of Love. Can overlap with Poorly Timed Confession.

"All turned on now?"

Napoleon tells Illya to turn on Gaby's tracker, which is hidden under her dress. Illya and Gaby nearly kiss during this, which Napoleon interrupts.

"All turned on now?"

Napoleon tells Illya to turn on Gaby's tracker, which is hidden under her dress. Illya and Gaby nearly kiss during this, which Napoleon interrupts.