Spoilers for the original series will be unmarked. You have been warned. 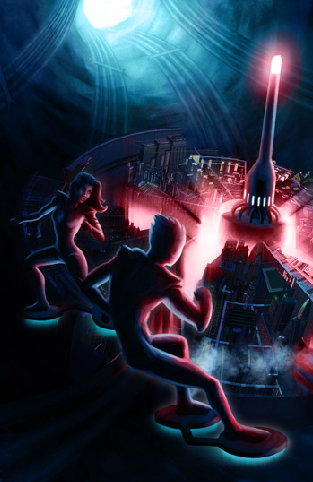 ReBoot: Code of Honor is a three-part webcomic sequel to ReBoot, written by Jeffrey Campbell.

The comic picks up after a Time Skip from the ending of My Two Bobs (aka the second half of Season Four), with Megabyte still in control of the Principal Office, and Mainframe now completely devastated and overrun with Megabyte's Zombinomes. The Users have seemingly abandoned the Net, there haven't been any upgrades or games in "hours".note In-universe equivalent to months or years.

Megabyte's "Hunt" has escalated into a Net-wide Viral War that has seen countless systems fall or be infected, either by Megabyte himself or other viruses that have been empowered by Megabyte. After rescuing Phong, Bob and co. evacuate Mainframe, planning to take refuge in the Supercomputer.

Shortly thereafter, the Guardian Collective receives a message from the Code Masters, who say they have a plan to deal with the virus epidemic: a firmware upgrade named "Gnosis", which they claim can eradicate any virus located anywhere in the Net.