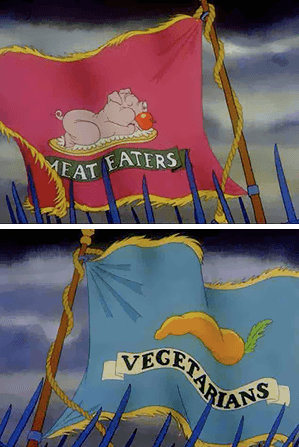 Meanwhile, all the omnivores have moved to Switzerland.
Beast Boy: My tofu dogs are cooked to perfection. Yo, Raven. Try one. They're loaded with soybean-y goodness.
Raven: I respect that you don't eat meat. Please respect that I don't eat fake meat.
— Teen Titans (2003), "The Sum of His Parts"note This is especially hilarious considering that Raven's voice actress, Tara Strong, is vegan in real life.
Advertisement:

Bob is a born and bred meat-eater. He counts meat-related foods as his Trademark Favorite Food and staunchly believes that Real Men Eat Meat, and in extreme cases will willingly become a Burger Fool just to be close to the burgers. Chicken, pork, beef, fish, lamb, goat—if it's meat, he'll eat it without any qualms, and he's not afraid to be a Large Ham about it.

Simon, on the other hand, is a vegetarian. As such, he's a supporter of the all-soy diet and would thus thrive in a Veganopia environment, and literally Does Not Like Spam. He'll probably eat Fantastic Fruits and Vegetables, or jump at the Call to Agriculture. Maybe he'll advocate Artificial Meat, the type that's made from plants and fungi, such as tofu, mycoprotein, or gluten steaks, and he might well assure you that it Tastes Like Chicken. Perhaps at one point he used to eat meat, but switched camps after meeting his food live and in person. Or perhaps he doesn't eat meat because it's against his religious beliefs to do so. If the creators of the work dislike veggies in general he will probably be a Straw Vegetarian, often of the Smug Straight Edge kind.

When their philosophies on food come together, expect them to clash. Bob thinks Simon is eating Fake Food, and that he just needs to try meat once to appreciate how good it tastes; Simon is squicked out by Bob's dietary choice and thinks he'll suffer Death by Gluttony for his obsession with meat.

A Cooking Duel may ensue for each side to prove that their preferred food type is superior to the other. Worst-case scenario, a Food Fight or Diner Brawl will ensue.

Basically, this trope is about the kind of conflict that goes on when a meat-eater and a vegetarian have to share the same dining space. There will be no middle ground. Throw in gender and the whole trope coalesces with Mars and Venus Gender Contrast, since Real Men Eat Meat and Women Are Delicate.

Compare and contrast Silly Reason for War, The Butter Battle Book (where a fight over dietary questions can and does really escalate).

No Real Life Examples, Please! The last thing we want here is a brawl between "meat-and-potato people vs. vegetarians."

Tucker and Sam organize protests about forcing other people to like the food they like. Danny is bewildered, even before they try to force him to choose sides.

Tucker and Sam organize protests about forcing other people to like the food they like. Danny is bewildered, even before they try to force him to choose sides.