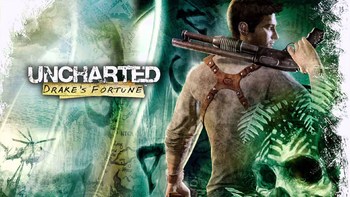 "There must be a beginning of any great matter, but the continuing unto the end until it be thoroughly finished yields the true glory."
—Sir Francis Drake, 1587 (opening quote)
Advertisement:

Uncharted: Drake's Fortune is the first game in Naughty Dog's Uncharted series. It was originally released on November 19, 2007 for the PlayStation 3.

Professional treasure hunter Nathan Drake, an alleged descendant of the explorer Sir Francis Drake, along with his old friend and mentor, Victor "Sully" Sullivan, and Elena Fisher, a photojournalist whose employer he has tricked into financing his expedition under false pretences, explores an abandoned island in the belief that Francis Drake faked his death in order to hide the vast fortunes of El Dorado. The situation is made more complicated by the fact that gang of pirates and mercenaries has also set their sights on the treasure.