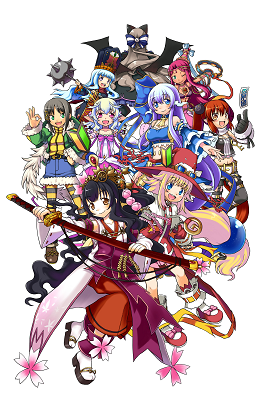 Trouble Witches is a series of doujin Bullet Hell Cute 'em Up games by Studio SiestA. The series consist of two games, one of which has been re-released three times already with an "English" version of the PC game canceled sometime during its production, with a sequel currently under development.

Trouble Witches Episode 1 ~Daughters of Amalgam~ (2007) is the first game of the series and debuted as a doujin PC game. The story is set in the magical country of Eihemland where a great witch named Amalgam has stolen a ring sealing away a powerful devil known as the Draupnir, and divided the pieces of said ring among her children where they cause havoc and mischief as they see fit. In response to the chaos being created by Amalgam and her children, the King of Eihemland spread flyers all across the country with a award to anyone who can stop Amalgam and her daughters with any wish they desire.

The original PC game featured three witches to chose from: Pril Patowle, Aqua Seep Seal, and Yuki Longate, with Sies Fabric Tinydream, a reoccurring mid-boss that can be unlocked as a bonus character but has became immediately playable after the "Ver.2" update. Each character have their own shot type, strengths, and their own take on the storyline in a fully-voiced Story Mode. One of the unique aspects of the game is the risk-and-reward mechanics of the game, of which is the Magic Barrier system where each witch can summon a barrier to slow down enemy fire and convert them into gold by destroying the enemy that originally fired those shots. However, this could work against the player if the enemies flees from the screen with their shots trapped in the barrier, which the bullets will home-in on the player, or get blown away from the bullets if their MP runs out. The gold earned not only go towards Scoring Points, but it can be used at the Pumpkin Sisters' shop (which usually appears twice during each stage) to spend your gold on Magic Cards and other goods such as 1-Ups and MP-boosting potions. The Magic Cards would give the user a different shot-type for brief periods of time, but destroying enemies under this effect would yield for score-boosting Star Coins, although taking a hit will knock the card out of you but saves you from losing a life, which results in losing a fraction of Star Coins collected.

The developers originally had planned an updated version of the game for PC titled Trouble Witches AC, however it was scrapped when the game got picked up for an arcade release instead in 2009 by Taito. The game ran on the Taito Type X arcade hardware and it featured some aspects that was originally planned for the PC version, such as introducing new characters — Louis Leondyke, Symphony Porlatt, Conon Mildiazzhe Krakow, and Lyla Arctauras — into Episode 1's storyline, along with some changes made to the core gameplay. Being an arcade game, it also lacks much of the features the original PC game had, namely the fully-voiced Story Mode. The game later made it's way into the NESiCAxLive arcade service in Japan in 2012, which also brought back Fabric Tinydream into the game's roster of magical girls. At the time Trouble Witches AC was being produced, Studio SiestA were also in production of a self-made English release of the first game as The Tomboyish Witches ~With Amalgam's Cutie Girls~, but like the originally planned AC re-release for PC, it was also scrapped.

Trouble Witches NEO! was the game's first-time venture into the mainstream market. Published by SNK Playmore and released world-wide for the Xbox 360 via Xbox Live Arcade on April 27th, 2011. It is essentially an enhanced remake of Trouble Witches AC while featuring the return of the original game's Story Mode, a Boss Rush and Score Attack mode, introducing two more characters into Episode 1 (one of which is DLC), co-op multiplayer, updated visuals for widescreen presentation, new character artwork, online leaderboards with sharable replays, Achievements, and the original arcade version of Trouble Witches AC as an added bonus. The two new witches introduced that are Sakurako Kujo, an otaku astrologist who wants to become a witch like in her favorite magical girl anime shows; and Luca Yurievna Vinakol, a devil princess with Lightning Bruiser-like qualities who's also madly in-love with the Draupnir.

Along with the return of the Story Mode, it also featured an option for English voice-overs as the developers puts it, "offers a full-voice dubbing in English and in Japanese to enjoy twice the game!", although its English localization is something this side of Castle Shikigami II and Chaos Wars, with a heavily abridged story from its original PC counterpart, lots of name changes for the characters (for better or worse). It also lacks the personal score rankings, the ability to revisit past stages, and the ability to switch Magic Cards on the fly of the original game. Unfortunately, the game and its DLCs were delisted from the Xbox Live marketplace in mid-late 2015.

Another re-release, Trouble Witches Origin, was released on November 21, 2016 through Steam. This version based around the original Trouble Witches with some small changes added for this version, while incorporating mechanics from NEO! and two new spell cards, with a new character by the name of Fuminoimiki Kozakura, who wears similar clothing to Sakurako Kujo. Origin also brings back Sies Fabric Tinydream as a playable character since the original PC and NESiCAxLive versions of Trouble Witches. Also guest stars the titular Cotton from the Fantastic Night Dreams Cotton series, and the return of the AC/NEO! cast (Louis, Symphony, Conan, Lyla) as DLC. 2 new additional (DLC) characters (Yoko Redster and Peropero) will be added in an early December 2019 update.

A sequel titled Trouble Witches Episode 2 ~With Decendents of Ancient Dragon the Souless~ was in the works, and from what was shown on circle's website, the game will be set in a different country with four new witches. The game however seems to be heading into Vapor Ware territory as nothing as been mentioned from Studio SiestA outside of a small screenshot of the game presumably running on Xbox 360 hardware and the developer's website no longer list the game among their other works.

This series now has a Character Sheet, so all characterized tropes should go there.

This series features trope examples of: