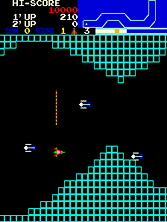 Vanguard is an arcade game made in 1981 by SNK, long before the company started making Fighting Games. The game is known as one of the first scrolling shooters ever made and is additionally notable by being the first Shoot 'Em Up where a player can shoot in four directions. Unlike other comparable games at the time, Vanguard was unique in that the player must focus on avoiding obstacles while firing in order to survive, which makes this game a precursor to Konami's Gradius and Irem's R-Type. It also has the distinction of being the first color game created by SNK. The game was licensed to Centuri for manufacture in North America in October 1981. Vanguard was followed up by a sequel, Vanguard II, which is similar to the original but with gameplay and graphical improvements.
Advertisement:

Vanguard is very similar to Scramble, in the sense that the player controls a ship with a limited amount of fuel that constantly depletes. The player loses a life once your fuel is gone, but gains more as enemies are destroyed. The player must constantly avoid colliding with the walls, which change in thickness all throughout the stages. The ship can independently fire lasers in any of the four cardinal directions using the four buttons. Vanguard is primarily a horizontal scroller, but in some levels (during the final level and also during the final boss), the ship flies upward, with a few transitional stages where the ship flies diagonally.

By securing the energy pods, a short time of invulnerability can be granted. This effectively turns the ship into a ramming weapon, and the enemies change attack patterns to avoid the player; the player could even destroy and burrow through terrain, though it wasn't a good strategy. At the end of each level the player must defeat a boss that is guarded by two moving force fields with holes in them. There are a total of ten zones in the game: Mountain Zone, Rainbow Zone, Styx Zone, Rainbow Zone 2, Stripe Zone, Rainbow Zone 3, Bleak Zone, and the City of Mystery where the player has to face the boss, known as Gond, which was similar to the boss level of Phoenix.

Theme music composed by Jerry Goldsmith for the 1979 sci-fi film Star Trek: The Motion Picture, later utilized for Star Trek: The Next Generation, is borrowed as Vanguard's introductory theme. Vultan's theme from the 1980 movie Flash Gordon is used as the sound effect when a power-up is attained.

Vanguard was also one of the earliest arcade games to feature a voice synth chip. For example, when a power up was about to end, the game warned, "Be careful!" The voice also announced each new stage.

Vanguard has examples of :