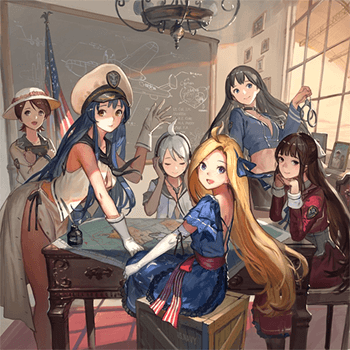 Guess who won the battle of the sexes in this world.
"Man, and I thought there were too many girls here before..."
— Yukinari, Girls Bravo
Advertisement:

An Improbably Female Cast is when a work's cast almost entirely consists of girls and/or women in a situation where this would be unusual. For example, a supposedly mixed-sex school where females make up more than two-thirds of the students.

It has been argued that the main reasons for a work choosing to have an Improbably Female Cast are:

Confusion between these motivations can easily result in a Periphery Demographic for both types of show. The writer may have wanted to tell a story about women outside of a traditional female role, to emphasize a fictional society in which this would not be unusual, or have been forced by Executive Meddling to add an unusual situation to provide excitement or appeal to a male audience.

Note that the mere fact of a story focusing on a group of women in a larger setting is itself not an Improbably Female Cast; it can occur only when the cast is intended to represent the entire or majority membership of a group and yet with no explanation most are female. For example, a work where the cast comprises the entire student body of a mixed-sex school, yet women are more than two-thirds of the students, is an improbably female cast. The same may also apply if the cast is an entire year group (a substantial division) or a single form group (a representative group). However, a story about a group of female friends in the setting of a mixed-sex school is not Improbably Female; it's simply a story about those particular characters, and the focus on that group makes no assertion about gender balance in the wider setting.

The Spear Counterpart is so incredibly common it would be near impossible to list all the examples. Its extreme Spear version is The Smurfette Principle, where there is only one woman in a cast of men.

Closely related to World of Action Girls, which facilitates the abundance of women. Any examples of casts made up exclusively of female characters (regardless of how improbable) fall under Chromosome Casting. For when an entirely female society is used as a setting, see Lady Land. If the complete cast only looks female, you might have a case of Otokonoko Genre.