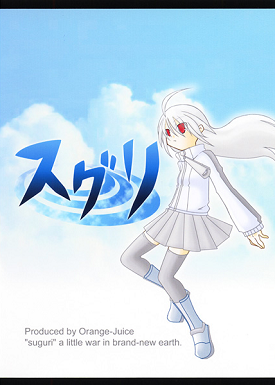 This is the story of one "human"... in a brand-new earth.
—SUGURI's opening cinematic

SUGURI is a horizontal bullet hell shoot 'em up developed by the doujin circle Orange_Juice and was released in 2005 at Comiket 69 for Windows PC. It stars the title character, Suguri, a girl armed to the teeth with a variety of powerful weapons working to protect her home world from similarly adorable girls who are under orders to wipe out all life on the planet and take it as their own. The game features an auto-targeting system which allows the player to fire in directions other than the usual "straight ahead", a dashing system which can be used to absorb certain types of bullets to charge up a Hyper Gauge to unleash a Hyper Attack, a variety of unlockable weapons, and multiple different modes of gameplay.

A sequel, Acceleration of SUGURI was released during Comiket 70 the following year, followed by an expansion pack, Acceleration of SUGURI X-Edition, releasing a few months after at Comiket 71, both for Windows PC. Unlike its predecessor, Acceleration of SUGURI is a one-on-one shoot 'em up and fighting game hybrid inspired by the Senko no Ronde, with both single-player and local and online multiplayer modes. It features the same cast as the original game, and presents the player with short "Where Are They Now" cutscenes for completing the Arcade Mode for certain characters of the game with a single credit. The X-Edition expansion pack also adds two story modes and several new characters.

The series has been localized to the United States by doujin game publisher Rockin' Android for PC, both as part of a SUGURI - Perfect Edition compilation on DVD, and individually through digital distribution platforms GamersGate and Direct2Drive in 2009. Acceleration of SUGURI X-Edition was later released for the PlayStation 3 by Rockin' Android on February 15th, 2011 as a downloadable game on PlayStation Network, which features redrawn artwork by Keiko Sakurai, PlayStation Network Trophies, and the ability to share replays on YouTube, although lacks the online play functionality and certain character unlocking conditions being changed for the PlayStation 3 version due to being a combination of both the base game and the expansion pack. Rockin' Android later released an HD version of Acceleration of SUGURI X-Edition for PC on DESURA on June 25th, 2012 with the option of using the original or updated PlayStation Network graphics, support for higher resolutions, and the online multiplayer absent from PlayStation Network version. On May 30th, 2013, a digitally released compilation of the series along with their original soundtracks, aptly-named the SUGURI Collection, was released via Rice Digital

. The games were later greenlit

for Steam. The PlayStation 3 version however was delisted from PlayStation Network on August 8, 2015.

Orange_Juice went on to develop sora, a prequel to SUGURI that was released in 2010 for PC during Summer Comiket 78 and was localized by Fruitbat Factory in 2016. Not to be confused with the Real Life Japanese figure-skater, Fumie Suguri.

The SUGURI series provide examples of: