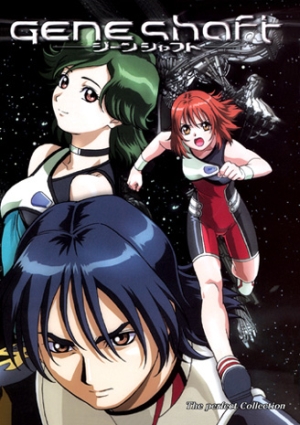 It's the 23rd century. Humanity has had a series of devastating wars behind it, putting it on the brink of extinction. In an attempt to deal with this problem, human population has been put under control through genetic engineering. Everyone has a set destiny from birth and the ratio between woman and men has been brought to 9:1, since most of the problems seem to stem from male aggression. People are categorized according to their genetic profile, which leads to certain Skills. Love and passion are largely eliminated—but not fully.

Mika Seido is a 16 year old girl born into this world with a "white" genetic make-up, which means that her role has not been completely filled in at birth. Because of this, she often is treated as inferior, especially by Mir Lotus, whose Skills are far beyond those of most other people. Mika likes to write e-mails to her sentient dog on earth and is devastated when her "mama" dies because of an alien attack.

Humanity faces its largest threat yet when gigantic rings appear in the space around earth, one of which promptly destroys several large cities—one with Mika's mama in it. The rings are controlled by the advanced AI Oberon, who has forged an alliance with an unknown leader of an anti-government terrorist group in order to wipe out humanity. To fight the rings, a special space ship has been constructed: the Bilkis. On board it carries a special weapon in the form of one of the weirdest-looking Humongous Mecha ever devised in anime: the Shaft. Mika is put onboard of the Bilkis and has to challenge both the alien and human threat and convince the crew—and herself—of her "white" potential.

Geneshaft was released in 2001 by Bandai Entertainment in America. It is an interesting take on the "humongous mecha in space" theme in that it maintains a curious and intense dynamic between the characters. The men still appear to be very macho, despite having grown up in a society ruled by women. People who are very sensitive to the abuse of scientific themes might best steer clear off this series. For all the other viewers, Geneshaft can be a nice ride along all of the tropes that come with the genre—and they can enjoy the wonderful animation and the heart-warming ending.