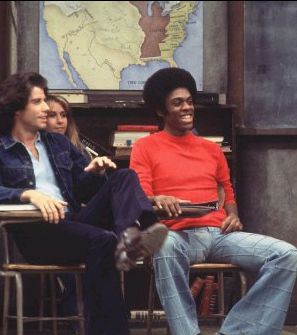 See the blonde in the back? She's a living prop.
Dog Poo: I think I deserve to take Kenny's place the most, because, I've been hanging around these guys for like five years and I never get to say or do anything.
Eric Cartman: ...Yeah, I've only seen that kid in class, but he never does anything. He's more like a prop.
— South Park, "Professor Chaos"

There's the Recurring Character, appearing more or less often beside the main cast. There's the poor Red Shirt, who is usually introduced only to get killed off in the very same episode, and the Mauve Shirt, who survives longer or at least gets a token amount of characterization before dying. There are the Hero of Another Story and the Bridge Bunnies, who get to actually run the place from time to time while our heroes boldly go where no man has gone before. There's even Spear Carriers, who have a line or two of actual dialogue.

And then, below all of those on the plot importance hierarchy, we have the Living Props.

These kinds of recurring characters don't actually have any involvement with the plot except as Padding, and their only purpose is to create a certain sense of stability (after all, you wouldn't expect the bartender to be a different person every single time you visit the same bar, unless they all happen to have George Jetson Job Security) or to fill seats that would reasonably always be occupied by the same people (your classmates will remain the same throughout the school year.)

They have very few spoken lines, if any at all — it's usually along the lines of "Hot or iced?" or "All systems ready, Captain". If this is noticeable or stretching realism they are Ghost Extras. Most of the time they just stand there in the background, as if they are a permanent part of the scenery that might as well be a living prop. Sometimes, however, they will be subject to Lampshade Hanging about their dedication to their one job, and if this trend continues, they may even transform into a proper Recurring Character, sometimes with their own subplot. Compare and contrast Unknown Character, for a character with plot relevance who was never shown.

They might also have been a Chekhov's Gunman the entire time. Or even something more.

open/close all folders
Anime and Manga
Comic Books
Films — Animated
Films — Live-Action
Live-Action TV
even in later seasons when she grew up a little, she never received any plots focusing on her (unlike Henry, Brock and Barbra Jean's son). She only speaks one time in the entire series and even then it's just one brief line.
Newspaper Comics
Professional Wrestling
Theatre
Video Game
Web Animation
Webcomics
Western Animation