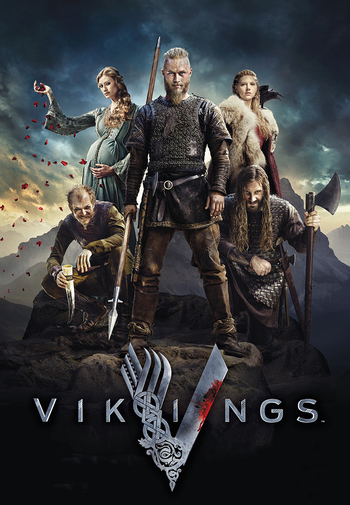 " note "Axe time! Sword time! Shields are splintered!"
If I had a heart, I could love you
If I had a voice, I would sing
After the night when I wake up
I'll see what tomorrow brings...
— Fever Ray, "If I Had a Heart", the series' opening song
Advertisement:

Vikings is a medieval drama series produced by The History Channel and created by Michael Hirst, the man behind Elizabeth and The Tudors. It follows a Norse family's efforts to improve the lives of their people and gain power in The Viking Age. The show adapts the semi-legendary sagas of Ragnar Lodbrok and His Sons. Much like the Icelandic sagas from which it is adapted, Vikings is an exploration of human conflicts set against the backdrop of a grim, violent, yet proud society.

Ragnar (Travis Fimmel) is presented as an ambitious man of humble origins who is dissatisfied with the established Norse practices of tending poor homesteads and raiding bankrupt villages to the east. Instead he looks west, dreaming of the riches and glory that await anyone brave enough to sail the open sea. Ragnar's plans of conquest and discovery bring him into a variety of deadly conflicts and introduce him to new cultures that challenge the foundations of his society. When his sons reach adulthood, they take up their father's mantle and attempt to make their own mark on the world.

The series premiered on March 3rd, 2013 and ran for six seasons, with a total of 89 episodes. A sequel series titled Vikings: Valhalla premiered in February 2022 on Netflix and is set a century after the events of the original show with Leif Erikson, Freydis Eiriksdottir, Harald Hardrada and William the Conqueror as the main protagonists during the final years of the Viking Age.

It also has Expanded Universe material including:

"Each must die someday."