Series / The Vigilantes in Masks 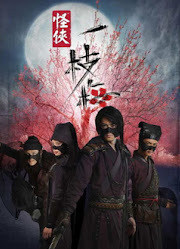 Li Ge Xiao was a high-ranking law enforcement officer before an enemy framed him. Years later he comes out of hiding to help a former colleague. Along the way he joins forces with Yan San Niang, He Xiao Mei and Chai Hu to rob the rich and give to the poor.

Not to be confused with the 2004 Hong Kong series The Vigilante in the Mask, which is an adaptation of the same story.