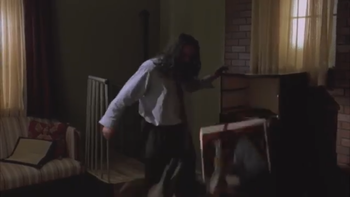 "WHY, LISA, WHY, WHY?!"
"His cases have gone badly of late. He never got to the bottom of that Veilgarden soul ring. And now it sounds like he's rearranging the station furniture with a hammer."
— Fallen London, when confronting Da Chief having a meltdown
Advertisement:

A character is angry. Very angry. He or she proceeds to smash up a room. This montage shows it, often in stuttercuts or other fancy editing work to make it look even more dramatic.