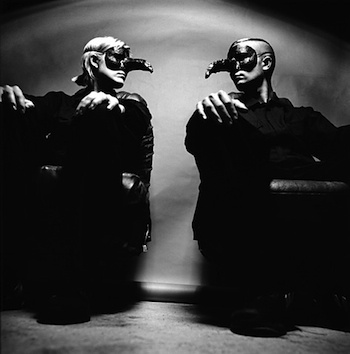 In a dream, all my teeth fell out: a cracked smile and a silent shout.
Influences:
Advertisement:

The Knife were an electronic music duo from Sweden, comprised of siblings Karin and Olof Dreijer.note  Karin previously went by Dreijer-Andersson, but has since divorced and dropped their married name. Imagine what you'd hear if David Lynch's films could sing you to sleep before they sell your soul to the devil in the nicest possible way, and you've got an idea of what their music is like.

The group formed in 1999, originally embracing lighter shades of electropop on their modestly acclaimed but widely unnoticed first two releases, and rising to public attention when Jose Gonzalez's cover of their song "Heartbeats" was used in a Sony Bravia TV commercial (the one with all the bouncy balls).

It wasn't until 2006, with the release of the notably darker-sounding Silent Shout, that they saw widespread success and established their most popular sound: a brooding, ethereal, and creepily bizarre take on Synth-Pop, with telltale characteristics including cold synths, tribal percussion, and the duo's trademark androgynous, pitch-shifted vocals.

They would, however, tinker with considerably more experimental sounds on their next two projects before officially disbanding in 2014 following the completion of the tour promoting their final album, Shaking the Habitual. Considering how varied their list of influences to the right is, their sonic eclecticism should come as no surprise.

They were also noteworthy for rarely interacting with the media and mainstream music scene, which led to multiple no-shows or boycotts of the Grammis Awards (the Swedish equivalent to the Grammy Awards), and waiting 7 years to begin performing live. While many attributed this to the Reclusive Artist act, the duo themselves stated that they weren't averse to press attention, but disliked some outlets trying to infringe on their personal lives. The few promotional images of them usually show them wearing Venetian plague doctor masks, or dressing as monkeys.

Both Karin and Olof have made names for themselves in solo ventures. Karin has earned the lion's share of public attention for their work under the name Fever Ray, as well as a number of features under their real name, while Olof has built a small discography as Oni Ayhun, and also DJs in European nightclubs as DJ Coolof.

The Knife provides examples of: