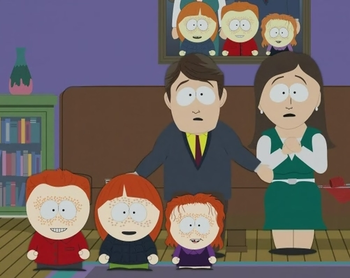 The chances of two dark-haired parents who both carry the gene for red hair having three redheaded kids in a row is 1/64.
"Glynnis, she has a birth certificate, she has my photograph, and she has my eyes."
— Lord Henry Dashwood (brown-eyed Colin Firth) on his daughter Daphne (green-eyed Amanda Bynes), What a Girl Wants
Advertisement:

We all know the basic Mendelian model of inheritance; traits are usually either dominant or recessive. Having one copy of a dominant allele means that the person will express the dominant trait, and the only way for someone to express a recessive trait requires having two copies of a recessive allele. Even outside of scientific terms, it's common reasoning that certain traits tend to run in families and we expect relatives to "match" in some way.

These facts are sometimes ignored in Hollywood casting, which can end up having (biological) families looking like just a random group of people. As a result, you'll see blondes having black-haired children, biracial people who look more black/Asian/etc. than their black/Asian/etc. parent, inexplicably large discrepancies in height between parents and children, and so on.

Sometimes families can look so unrelated that it can take focus from the story. "Where did Alice get black hair and brown eyes if Bob and Carol are green-eyed redheads?"

This can even interfere with the plot if a physical resemblance is a plot point (especially in an adaptation when characters get an Adaptation Dye-Job or otherwise don't match the physical description of the character in the original work).

There are certain justifications; the mechanics behind real life genetic inheritance are more complicated than the Mendelian model, which doesn't factor in mutations, malfunctions, and polygenetic traits. Also, casting around to get the most plausible genetics is not always practical—after all, you're not going to turn down Harrison Ford for a part because his eyes are the wrong color. Sometimes it's an Enforced Trope, as having a cast of characters who all look the same is rather boring.

On the other hand, you don't have that excuse in non-visual media or in animation where the powers that be have complete control over how characters look. And you could always give Harrison Ford contacts (or even digitally alter his eye color in post-production).

Compare Identical Grandson, Uncanny Family Resemblance, WTH, Casting Agency?, and Patchwork Kids, which can veer too far in the opposite direction. When done intentionally, the dissimilar child is a Chocolate Baby. Compare also Random Species Offspring when even the species of the offspring is different from the parents. Also see LEGO Genetics, for the Science Fiction take.

open/close all folders
Anime & Manga
General note before adding examples:note  Hair and eye colors in Japanese media are normally chosen to tell characters apart and to match their personalities (e.g. Shy Blue-Haired Girl, Red Eyes, Take Warning)—combine that with Only Six Faces and Mukokuseki, and anime characters having anything notable in common with their families is the exception rather than the rule (although there will be an occasional Hereditary Hairstyle). For that reason only aversions or egregious examples should be listed.
Asian Animation
Comic Books
Comic Strips
Fan Works
Films — Animation
Films — Live-Action
Literature
Theatre
Video Games
Webcomics
Western Animation