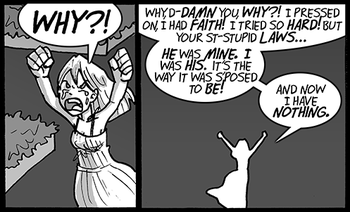 "Where is my faith? Even deep down ... there is nothing but emptiness and darkness ... If there be God—please forgive me. When I try to raise my thoughts to Heaven, there is such convicting emptiness that those very thoughts return like sharp knives and hurt my very soul ... How painful is this unknown pain—I have no Faith. Repulsed, empty, no faith, no love, no zeal, ... What do I labor for? If there be no God, there can be no soul. If there be no soul then, Jesus, You also are not true."
— Mother Teresa
Advertisement:

A character with a religious belief, whether it be fervent, casual, or never mentioned before or since, loses it and spends a Story Arc as an unbeliever until learning a valuable lesson about faith. More Anviliciously, a Hollywood Atheist Long-Lost Uncle Aesop may be introduced, just to be enlightened and then never heard from again.

The Reset Button will often be in full effect — after all, in mainstream American media (where this trope is most common) God Is the Status Quo and the Moral Guardians might kick up a fuss if the option of losing one's faith for good were presented as a valid decision. Naturally, Values Dissonance abounds for viewers who consider atheism a valid outlook to live by.

Of course, suffering a period of painful doubt is completely Truth in Television for people with a strong faith in any cause. Sometimes it's a painful transition that ultimately leads to a new outlook, and sometimes it's a period of existential angst leading to developing a deeper and more nuanced faith because of the experience. This is not the place to debate these issues.

A more angry reaction may include Smite Me, O Mighty Smiter! or Rage Against the Heavens. The character will most likely become either a Hollywood Atheist, losing all will to live or respect for morality, or a Nay-Theist, accepting that God exists but refusing to worship him.

When the conversion comes complete with a readjustment of the moral compass, see Heel–Faith Turn and Faith–Heel Turn.

Songs on this subject often sound like Breakup Songs, can overlap with Love Is Like Religion, and are the flipside of God-Is-Love Songs.

Not to be confused with Have You Seen My God?, where the divinity in question really is MIA. Compare Religious Russian Roulette, where the character lets their belief in God ride on their request for a miracle.

Sub-Trope of Break the Believer. Compare and contrast Turn to Religion, where a crisis inspires the character to become a believer.

And then in "The Uses of Adversity" (from 2013's Dig Here Said the Angel), he takes the position that these crises may be necessary.
No don’t send me certainty
If somehow it’s best for me to doubt

At the end of his rope and about to be arrested by Rome, Simon questions whether God really cares about his people, bringing up all the times they were enslaved or captured.

At the end of his rope and about to be arrested by Rome, Simon questions whether God really cares about his people, bringing up all the times they were enslaved or captured.