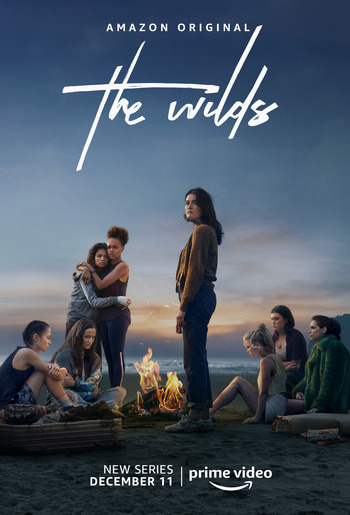 The Wilds is an American teen drama series created by Sarah Streicher for Amazon Studios, the first season released on December 11, 2020. The series is described as "equal parts angsty teen drama and survivalist adventure" by Refinery29

while fans compare it to a female-centric Lord of the Flies meets Lost.
Advertisement:

En route to Hawaii, nine teenage girls from different backgrounds suddenly find themselves fighting for survival when their plane fails and crashes on a deserted, remote island. Together, the castaways clash and bond as they learn more about each other, including the secrets they bear and the traumas they endured. Amongst them is Leah, who survives to share their story as evidence mounts that their crash was not an accident but by design...

The Wilds contains examples of: