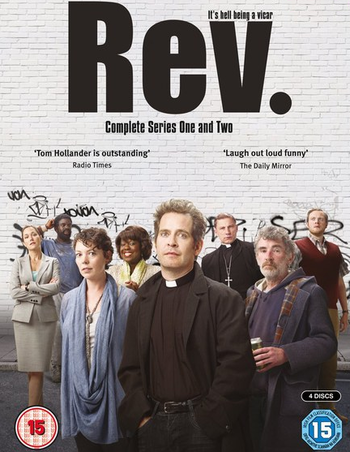 L - R: Ellie, Mick, Alex, Adoha, Adam, Robert, Colin, Nigel
Rev. (2010-14) is a BBC television sitcom. Reverend Adam Smallbone is an Anglican vicar who has recently been transferred from a small rural parish to the "socially disunited" St Saviour in the Marshes in East London. Unable to turn anyone away from his new appointment, Smallbone is faced with a collection of moral challenges as he balances the needs of genuine believers, people on the streets and drug addicts as well as with the demands of social climbers using the church to get their children into the best schools.
Advertisement:

Adam has an impossibly difficult job being a good modern city vicar and his wife, Alex, does her best to support him, but she's got her own career as a solicitor to worry about and she is no one's idea of a conventional vicar’s wife. He is also supported by lay reader Nigel, although he firmly believes that he should be the one running the church. In immediate supervision is Archdeacon Robert, who continually puts pressure on Adam to increase the congregation and church income.

Parishioners include Colin (a heavy-drinking, unemployable lost soul who is Adam's most devoted parishioner), Adoha (well-known for her romantic interests in the clergy), Ellie (the head teacher of the local primary school) and Mick (an irredeemable crack addict).