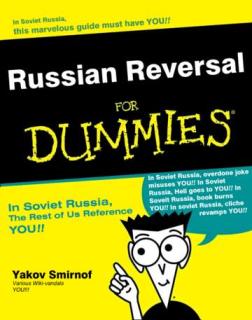 Dummies for Russian Reversal!
"In America, you can always find a party.
In Russia, the Party always finds YOU!!"
— Yakov Smirnoff, Miller Lite Commercial, 1985

The Russian Reversal, more technically called an antimetabole, is a type of joke popularized by Ukrainian comedian Yakov Smirnoff. It is based on taking a statement about capitalist United States and inverting it to describe the then-communist Russia as a dystopian hellhole. Smirnoff later added the prefix "Soviet" to indicate the jokes were meant to target the past regime, as opposed to The New Russia. For instance:

"In America, you watch Television.
"In Soviet Russia, television watches YOU!!"

The political undertone of Smirnoff's original jokes tends to be conspicuously missing from the imitations, leaving the joke as just "it's funny when things are opposite".

At its most basic, the Russian Reversal takes a situation where a noun normally does something to another noun, and flips it in dialogue to where the second noun acts on the first. For instance, a murder mystery that had a butler as the Body of the Week could be described in a Quip to Black as "It Did the Butler" or the equivalent instead of "The Butler Did It."

This trope may also have a linguistic basis, as Russian uses Object-Verb-Subject word order for unusual situations.

Can cause an Inverted Trope rather easily, if the starting trope can be described as "X verbs Y." If in this instance, "Y verbs X," it is both this trope and an inversion of the other trope.

It's also the source of many trope names:

Russian Reversals with a Trope Name

See also Glorious Mother Russia for the Hollywood Atlas version of Soviet Russia that inspired the jokes, and Spoonerism for the same thing done on a smaller scale with syllables within a single word. Not to be confused with The Backwards Я. Compare Just the Introduction to the Opposites, when the context remains the same even when roles are swapped.